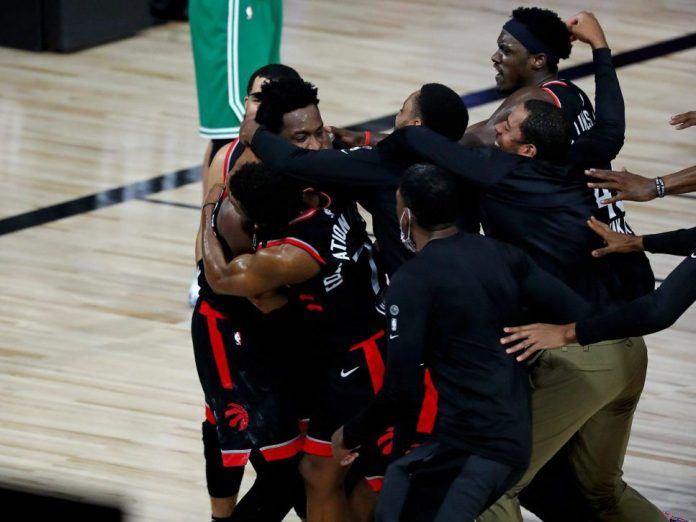 The Raptors have life thanks to the most improbable shot since Kawhi Leonard’s four-bouncer a season ago against the Philadelphia 76ers.

Down for much of the night and trailing by two with just a half-second left on the clock, the Raptors looked like they were headed to the almost insurmountable 3-0 deficit in their Eastern semifinal against the Boston Celtics.

Instead, Kyle Lowry somehow got a cross-court inbounds pass over the Celtics’ 7-foot-5 Tacko Falls who was there to make things as difficult as possible for the inbound. Lowry didn’t just get the pass off. He delivered it perfectly and, really, he had to in order for OG Anunoby to get the shot off in time.

A half-second is the minimum amount of time for a catch-and-shoot. Any gather or extended windup and the shot would not get off in time.

Anunoby, as only he can, calmly received the pass and released it over a leaping Jaylen Brown for the stunning 104-103 win.

Anunoby then coolly walked back to his teammates who were making a bee-line towards him, jumping and hooting. Anunoby was, typically, non-plussed. He could have been walking back to the locker room after a loss, he was that unresponsive to his magical moment.

“That was true OG form right there to knock down the biggest shot of his life and act like nothing happened,” Fred VanVleet said of his teammate’s stoic poise. “But for the rest of us, we were more excited for him than he was for himself,”

Head coach Nick Nurse, looking and sounding like he had played the same 46 minutes Lowry did on the night or even the 45 Anunoby put in, admitted even having Lowry making the inbounds pass was a bit unorthodox.

“There’s not a lot of times that you probably want, let’s call him a 6-foot-1 guard, taking the ball out in a late-game situation because you saw what they do. They try to put size on it and limit your vision,” Nurse said of Falls. “We would probably do something similar, right?

“But you say to me: Why is Kyle taking it out? I say because he’s got guts, man. You’ve got to make a gutsy play every now and then.”

And, really, that was what this game was all about for the Raptors. Guts and sheer will and it started and pretty much ended with Lowry.

“It was just a pass I made and the pass was nothing,” Lowry said. “OG made the shot, all the credit goes to the shot. That’s a tough shot, give OG that credit, the pass was just to get it inbounds and to OG. That’s OG’s moment, man. That’s a great moment for that kid and I’m so happy and so proud of him, man. That shot was everything.”

With the seconds ticking down in a tie game, it was Kemba Walker dribbling around the Raptors and then finding Daniel Theis alone under the basket to put the Celtics up by two.

But Walker left the Raptors just 0.5 seconds on the clock and nothing short of perfection from, first, Lowry and then Anunoby was going to change that.

Much like Game 2, the Raptors began the night struggling to hit a shot.
Outside of Lowry, who looked from the beginning like he was going to will this one to a Raptors victory by himself, and an offensively rejuvenated Marc Gasol offence was very limited to start the night for Toronto.

Pascal Siakam continued to struggle, as did VanVleet, who couldn’t find the range again.

And the Celtics, while not humming themselves offensively, were doing enough to keep the Raptors in a trailing position.

Walker, who was quiet for three quarters of Game 2 before heating up in the fourth, came out red-hot in this one on his way to a Celtics best 29 points. The only player on the floor to outscore him was, of course, Lowry who had 31.

The Raptors were down by five at the end of a quarter and, after getting a 10-point deficit down to five again, ended the half miserably when Walker nailed a three to send the Celtics to the locker room up 10.

But getting back to Lowry, the Raptors engine was in high gear from the opening tip and never took his foot off the gas.

With seven minutes to go he picked up his fifth foul and that may have been the only time all night he took a step back and that was only for a possession or two.

The third quarter saw the Raptors defence come to the forefront. During one three-minute segment, they held the Celtics scoreless on six consecutive possessions.

Initially, they didn’t take full advantage but the stops seemed to fuel Toronto and, before you knew it, both Siakam and VanVleet finally started heating up.

Suddenly those three-pointers that VanVleet was missing were finding the target. Siakam got going with a three-of his own with about six minutes left in the third quarter.

Siakam had just two points through the first half but, by the end of the third quarter, was up to 14. He finished with 16.

This time, there was no other-worldly shooting from Marcus Smart or any other Celtic. Rather, the Celtics took turns keeping the Raptors within reach.

And that’s the issue with the Celtics. They don’t need one hot hand because they have so many options. Jayson Tatum is option No. 1, but after that, you still have Brown and then Walker and then Smart after that.

The Raptors were supposed to have a huge edge in the depth in this series with Gordon Hayward out and Smart having to leave the bench to join the starters. But in Game 3, it was the Boston bench outscoring Toronto 20-10.

In the end though it was the tandem of Anunoby and Lowry that made sure the Raptors hopes in this series remain realistic.