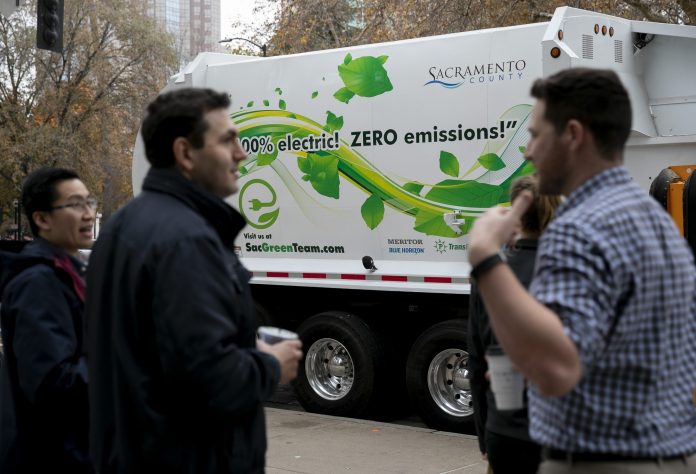 The requirements begin in 2024. By 2035, 55% of delivery vans and large pickups, 75% of commercial trucks such as garbage trucks and 40% of the big rigs sold in California must be emissions-free.

California today adopted the world’s first regulation that forces manufacturers to ramp up sales of zero-emission trucks and buses over the next 15 years.

An estimated 300,000 trucks powered by electricity or hydrogen must be on California roads by 2035 and 100,000 by 2030, under the standards unanimously approved by the state’s top clean-air enforcers.

Several years in the making, the mandate is aimed at cleaning up diesel big rigs, delivery vans, school buses and other large vehicles that are pumping out pollution on California’s roads. Reducing truck exhaust is essential for ensuring that the state’s urban areas, particularly in the Los Angeles basin, meet health standards for smog and soot.

“It is clear this is the first of its kind in the world,” said Air Resources Board Chairwoman Mary Nichols. “It’s part of a long line of groundbreaking actions that this board has taken to protect our air. But it is a very important one given its particular relevance for low income and communities of color.”

The clean-vehicle mandate begins with 5 to 9% of trucks sold in 2024. By 2035, 55% of delivery vans and large pickups, 75% of larger vehicles such as school buses and garbage trucks and 40% of the big rigs sold in California must be zero-emissions.

“This rule is foundational to efforts to transition medium and heavy duty vehicles to zero emission technologies,” Andrew Schwartz said on behalf of Tesla, Inc., which has announced plans to produce electric pickups and electric semi trucks.

Manufacturers of conventional diesel engines, however, warned that there is no guarantee that people would buy the new trucks. Zero-emission large pickup trucks and delivery vans will cost about $10,000 to $20,000 more than conventional vehicles, and big rigs will cost up to $70,000 more, according to the air board.

“There’s no (battery) charging infrastructure, and developing one is very expensive and there is inadequate incentive funding available,” said Jed Mandel, president of the Truck and Engine Manufacturers Assn. “All of those factors are exacerbated by the pandemic, the recession, the state’s budget.”

To address the industry’s concerns about demand for electric trucks, the air board will require fleet operators to report their truck use, laying the groundwork for a future rule that would require fleets to purchase clean trucks.

Despite concerns about costs for vehicles and charging infrastructure, the air board estimates that the rule will result in 7,500 new jobs, $5.9 billion in net savings, including from reduced fuel and maintenance costs, and an additional $8.9 billion in avoided deaths, hospitalizations and lost workdays.

Transportation is the number one source of smog and greenhouse gas pollution in California. And while heavy-duty trucks make up a fraction of that vehicle fleet, they produce about 25 percent of diesel pollution — a known cancer-causing pollutant that’s estimated to contribute to more than 1,400 early heart disease deaths in California per year.

Pollution from diesel trucks hits Latino, Black, Asian American and lower-income Californians the hardest, according to a Union of Concerned Scientists Analysis. Trucks are a major source of smog, soot and cancer-causing gases in neighborhoods around the ports of Los Angeles and Long Beach, which rank among the world’s busiest. And preliminary data suggest air pollution may be linked with higher death rates from the novel coronavirus.

“We see thousands upon thousands of trucks enter our communities every day,” Andrea Vidaurre, policy analyst at the Center for Community Action and Environmental Justice, said at the hearing.

Vidaurre sought stricter standards for big rigs than proposed. “Our communities that are on the front line of the supply chain whose bodies, lungs, labor and environment make it possible for shelves to be stocked and packages to be delivered are calling for [the air board] to accelerate your targets.”

Still, the new rule is tougher than the version that air board staff floated at the end of last year, which drew ire from environmental advocates and truck manufacturers alike.

Environmental advocates and lawmakers worried that the original proposal was too weak. For one thing, pickup trucks weren’t included in the sales requirement until 2027, and the sales targets were lower. Air board staff estimated that it would have put 65,000 clean trucks on California’s roads by 2030.

The new rule is an improvement, said Jimmy O’Dea, senior vehicles analyst with the Union of Concerned Scientists. But air board staff said that means only 15 percent of the 1.9 million trucks expected to be on California’s roads in 2035 would be zero-emission.

“So as big of a step is this policy is, there’s a lot that needs to be done to address the remaining 85%,” O’Dea said.

The U.S. Environmental Protection Agency must grant California a Clean Air Act waiver before it can enforce its new rule.

Other states have signaled their interest in following California’s lead. Officials from Connecticut, Massachusetts, New Jersey, New York and Washington State called into the hearing to voice their support for the standards.

“By adopting these standards, California will once again lead the way in driving our country to make meaningful changes in the transportation system,” Kathy Taylor, air quality program manager at Washington State Department of Ecology, said.