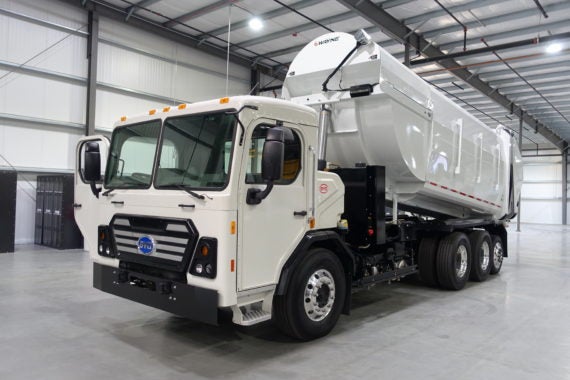 One April 28th, the California Air Resources Board (CARB) released the final draft of the Advanced Clean Trucks standard, a policy that will require truck manufacturers to make electric trucks. The proposal’s release kicks off a 30-day public comment period leading up to a Board vote on June 25–26.

Today’s proposal follows an earlier draft that was presented to the Board last December and generated significant pushback from the public (including UCS) and CARB Board Members for not being strong enough. In response, CARB staff made three changes to strengthen the proposal (shown in red below).

First, sales targets were increased across all vehicle categories. Second, sales targets increase through 2035 rather than flattening out in 2030. Third, Class 2b pickup trucks (e.g., Ford F-250) are included in the standard in 2024 rather than being exempt until 2027.* As a result, the latest proposal doubles the number of electric trucks achieved by the previous version through 2035.

Based on CARB’s most recent projections of annual truck sales, analysis by UCS indicates that the proposal will require 4,000 electric trucks to be sold in 2024 out of roughly 75,000 total sales. The proposal will result in roughly 100,000 and 300,000 electric trucks on California’s roads in 2030 and 2035, respectively, out of roughly 1.8 million and 1.9 million total trucks expected in those years.

The new proposal is a big step in the right direction and perhaps the most significant policy for electric trucks to date anywhere. Even colleagues in China, a country with the largest deployment of electric trucks and buses, are watching what CARB does next.

But the numbers above show that this policy alone won’t transition the heavy-duty vehicle sector from one fueled by diesel to one powered by batteries and hydrogen. It will take additional actions to eliminate trucks’ pollution burden and their contribution to climate change.

One action CARB should take when it votes on the Advanced Clean Trucks standard in June is to formally commit to timelines for transitioning to electric trucks in California. Initial timelines were laid out in a recent public workshop and are critical to sending a clear signal that most, if not all, trucks in the state will be electric within the next 20 years.

How does COVID-19 affect this proposal?

Unfortunately, but perhaps unsurprisingly, opponents of electric vehicles are trying to use the current health and economic crisis to delay the Advanced Clean Trucks proposal. UCS stands with over 60 community, health, science, and environmental groups (here, here); health experts; and state legislators on the importance of moving forward with this standard and other air quality policies under development.

Why? Although air pollution is currently reduced in many – but certainly not all communities – due to stay-at-home orders, this is a temporary effect. The chronic impacts of pollution, which disproportionately burden communities of color and low-income communities, remain. And the longer residence times of global warming gases, like carbon dioxide, in the atmosphere compared to air pollutants like nitrogen oxides and particulate matter, means short-term decreases in emissions will be even less noticeable from a climate perspective.

The Advanced Clean Trucks standard has been under development since November 2016 and will not take effect until model year 2024, seven years from start to implementation. While regulatory development is inherently long, the seven-year timeline represents a significant delay from original plans. In California’s State Implementation Plan to meet federal air quality standards, a policy for electric trucks was envisioned to be voted on in 2018 and begin implementation in 2020.

Between now and the June vote, we will continue to show the important role electric trucks can play in protecting public health and reducing the climate impacts of heavy-duty vehicles. Tell CARB why you support action on electric trucks here.

Note, the ISOR includes a ~1 percent annual growth in sales. The percent of electric trucks on the road was estimated using a Class 2b-8 population derived from CARB’s EMFAC model, excluding motor homes, transit buses, coach buses, and trucks registered out of state, which are not subject to the Advanced Clean Trucks standard (sales of electric school buses do count). In 2024, the model estimates there will be 1.7 million heavy-duty vehicles on the road with these filters applied (1.9 million heavy-duty vehicles total). The same ~1 percent growth rate in annual sales was applied to the total population of Class 2b-8 vehicles.

* Class 7–8 tractors were originally excluded from any electric truck sales targets, but after public pushback, included in the December 2019 proposal.

** Another 500 zero-emission transit and coach buses have also been awarded funding from the state but these vehicle categories are not subject to the Advanced Clean Trucks standard.

*** Class 2b pickups comprise 67 percent of the Class 2b-3 annual sales in EMA’s estimate. This fraction was used to calculate electric truck sales under the previous policy scenario that excluded pickup trucks from zero-emission vehicle requirements until 2027. Follow CleanTechnica on Google News.
It will make you happy & help you live in peace for the rest of your life.

Guest Contributor is many, many people. We publish a number of guest posts from experts in a large variety of fields. This is our contributor account for those special people. 😀