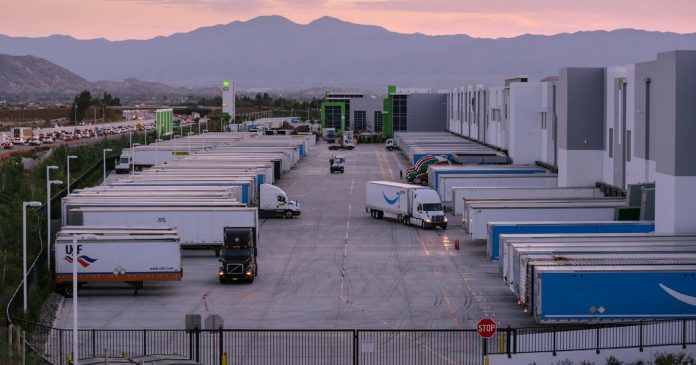 Mr. Victoria’s organization, the Center for Community Action and Environmental Justice, has now started to organize truck counts, with volunteers using clickers and clipboards to record the amount of traffic racing by. On Feb. 12, on a freeway near the Amazon hub, he and his colleagues counted 1,161 trucks in a single hour. The group later presented that number at a state regulatory hearing.

“You’re talking about upward of 21,500 trucks that travel through our communities per day,” he said. “Children oftentimes can’t play outside on certain days because the air quality is so bad.” And the pandemic has not slowed the truck traffic, given that more people have been shopping online.

Amazon did not immediately respond to requests for comment.

Attention now turns to the 14 states and the District of Columbia that have followed California’s lead in adhering to stricter emissions standards for passenger vehicles.

The Truck and Engine Manufacturers Association, which represents makers of internal combustion engines and trucks, has continued to argue that the industry, reeling from the pandemic, is hardly ready for tougher environmental regulations. “This is not a business-as-usual situation, and it should not be a regulation-as-usual situation, either,” it said in a letter to regulators in March.

The Western States Petroleum Association, an industry lobby group that represents oil companies like Chevron and Marathon Petroleum and which opposed the rule, did not immediately respond to a request for comment. In a joint letter to California regulators in December, sent together with the California Chamber of Commerce and other industry groups, the petroleum association said that the rule would “not work in the real world.”

Still, the new rules have strong political backing. In response to the industry’s concerns, 36 state lawmakers urged Gov. Gavin Newsom of California to “resist attempts by polluting industries to exploit our current crisis to loosen, rollback or delay” environmental rules. “Now more than ever, even as the federal administration works to dismantle fundamental regulations, we must uphold our commitment to safeguard Californians’ well-being,” they wrote.

New York Philharmonic Restarts the Music With a Pickup Truck

Automakers adjust to ‘new normal’ as they prepare to reopen plants