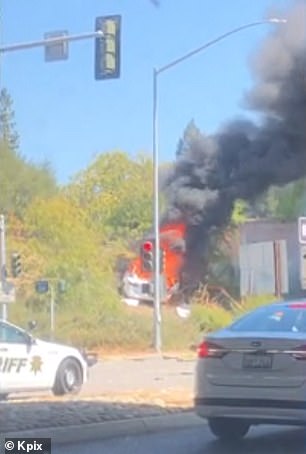 By Rachel Sharp For Dailymail.com

A Tesla repeatedly hit a minivan on a California highway, before traveling down an off-ramp where it crashed into a pickup truck and caught fire, killing one and injuring five others this week, according to authorities.

California Highway Patrol Officers said a deadly crash involving a white Tesla on an intersection in Saratoga Wednesday morning came moments after the same car crashed into another vehicle on a freeway.

Four people were rushed to hospital following the horrific incident, with one victim – a 75-year-old man – pronounced dead soon after.

Authorities revealed shocking new details about the moments leading up to the fiery crash on the intersection of Saratoga Avenue and Highway 85 at about 11:20 a.m Wednesday. 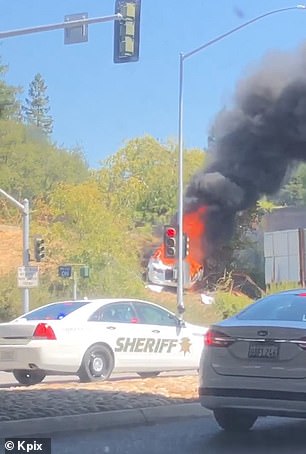 A Tesla repeatedly hit a minivan on a California highway, before traveling down an off-ramp where it crashed into a pickup truck and caught fire, killing one and injuring five others this week, according to authorities

California Highway Patrol Officer Ross Lee said the Tesla first crashed into the back of a Toyota Sienna minivan several times on the freeway just south of the northbound off-ramp to Saratoga Avenue.

The collision caused the minivan to spin out while the Tesla flew down the off-ramp where it then crashed into a gray pickup truck at the intersection and burst into flames, Lee said.

Three of the victims had life-threatening injuries and one man died in hospital.

Authorities on Thursday identified the man killed in the crash as David Alan Brown of Saratoga, 75.

Brown was traveling in the Tesla at the time but it is not clear if he was the driver.

Two other people, including the minivan driver Raffaella Brunello, were treated at the scene for minor injuries and released a short time later.

Brunello told Mercury News she was lucky to be alive following the collision and was suffering from neck and leg pain. 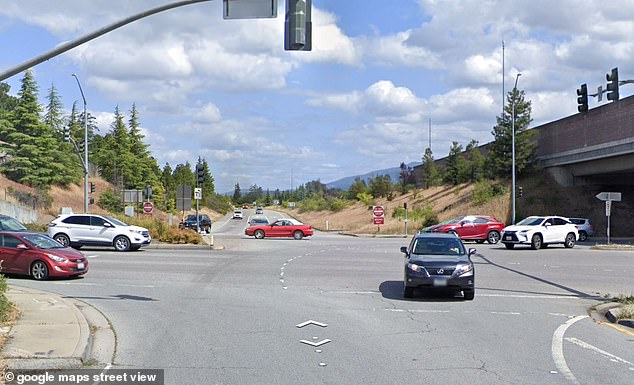 ‘I thought I would have died,’ she said.

‘I am thankful to the people on the highway that immediately came to help me and stopped the traffic to move my car.’

The two crashes are being investigated separately.

Travel and entertainment trends in Europe are 'encouraging' signs for U.S....