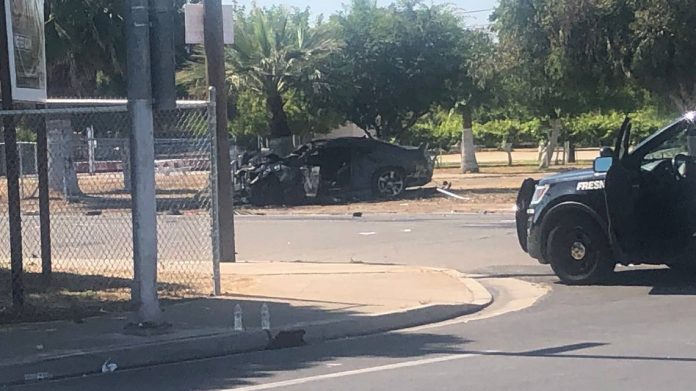 A Chevy Camaro t-boned into a pickup truck at a high speed Thursday afternoon in southwest Fresno, prompting a couple of men to rush from a nearby business to help free a passenger from the collision.

The man who was stuck in the pickup was unresponsive when store owner Shaker Alzamzami of the nearby A&M Westside Market, as well as a patron, came to the scene to assess the damage.

Video footage shows the pickup slowing moving out of a parking lot and onto the street when the Camaro smashed into the truck near Whitesbridge and Thorne avenues, and caused the sports car to flip multiple times.

The occupants in the Camaro escaped the vehicle on their own before it caught on fire from multiple flips.

The driver of the pickup truck also was able to get out of his vehicle on his own.

But the pickup truck passenger needed assistance, particularly after the vehicle started to smoke.

“People were running away and thought the (truck) was going to blow up,” Alzamzami said. “I couldn’t leave this guy.”

Little by little, the store owner and patron loosened the man’s leg and freed him before pulling him to the top as the truck that was on its side.

Anthony Galaviz writes about sports for The Fresno Bee. He covers the Las Vegas Raiders, high schools, boxing, MMA and junior colleges. He’s been with The Bee since 1997 and attended Fresno City College before graduating from Fresno State with a major in journalism and a minor in criminology.
Support my work with a digital subscription

Pictures Of Trucks That Couldn’t Handle A Muddy Trail