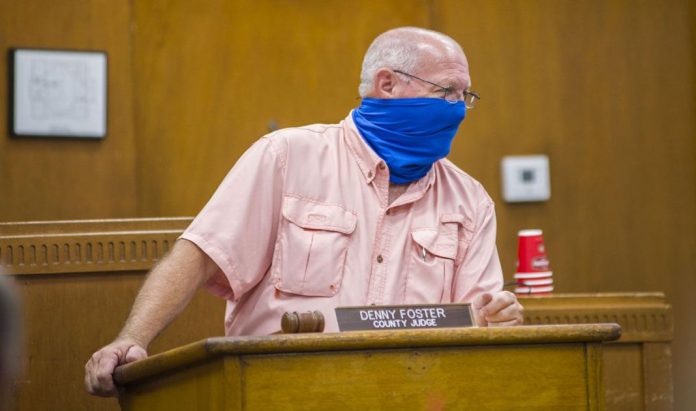 Columbia County’s solid waste complaints have seemingly calmed down after the local Quorum Court in June made it clear something had to change with their collection contractor, WCA, or action needed to be taken.

On Monday, Columbia County Judge Denny Foster reported that cameras have been installed on at least one WCA truck, with more possibly coming on two other trucks. The move was made to determine once-and-for-all if the trash collection issues are due to negligence by the contractor or the residents simply not placing out their trash. The result of the partnership with WCA, according to the judge, has been drastic over the past month.

“Our calls have gone down to nothing,” said Foster. “Where we were getting 40-50 calls a day, there was an eight-day period where we got zero calls about trash.”

Last month, the judge said his office was flooded with dozens of complaint calls every week over lapsed pickups and reports of excessive debris buildup. To help remedy the issues, WCA also began spot-checks. As a result, the company witnessed 55 homes in a single day on one route with no trash bins placed on the curb, and another day saw the number in the 30s.

“I think we’ve come a long way,” Foster said. “I think the only complaints we have now are limbs and brush. But since June 30, I’ve only had about seven calls. I think we’re on the right track.”

WCA District Manager Mike Howell was present Monday and addressed the court over the past issues. He stated that the extra debris buildup was from excessive spring storm damage causing the waste contractor to fall behind.

“Waldo looked like disaster zone for the longest,” he said. “But we managed to get beyond that with the county’s help. All the extra storm debris that was out there — that’s pickup up, and now we’re on track where we need to be.”

Howell also said that coronavirus-related issues had contributed to the pickup backlog. Due to so many business closures, he said there was a shift to more residential garbage buildup and less commercial and restaurant waste.

“We’re talking to the tune of 300 to 500 tons in addition to what we were picking up,” he said. “We had to move trucks out and finish the routes the next day. The trucks were at capacity.”

He noted that lately, though, the trend is moving back to normal. He also said that the company gets complaints about missed routes before the trash provider even makes it to that particular street on their pickup day.

“We’re not perfect. We’re human. We’ll make mistakes,” Howell said. “But we’re going to do our best to get that taken care of and get that remedied.”

Even with the good news, Justice of the Peace Steve Lee noted that “wheel problems” were still present among his constituents in the southern portion of the county. Last month, multiple JPs reported a prevalence of trash canisters with broken wheels after a pickup. Foster on June 2 reported that the county had already spent nearly $12,000 this year repairing 322 damaged green curbside garbage cans.

“They’re still slamming (the cans) down too hard,” said Lee.

The judge on Monday did not have the official number of wheel complaints, but stated those calls had diminished as well.

In other Quorum Court news:

The court unanimously passed an ordinance amending the Columbia County employment and sick leave policy. The modifications include:

– New regular work period for county law enforcement and jailors is 85.5 hours for consecutive 14-day work periods. Anything over that will result in overtime or compensatory time.

– County employees must now report sick day absences at least two hours before their workday begins, unless prior approval has already been granted.

– Sick leave can now be used in increments of less than two hours.

A resolution was passed declaring a vacancy for McNeil Township’s constable. The move comes after John Ferguson, the former constable in McNeil, relocated from the district.

CLICK HERE to read more local news on our website. Tell your friends and family that thanks to our advertisers, they can read news for free on our website.

Pictures Of Trucks That Couldn’t Handle A Muddy Trail

Elizabethtown man responsible for leaving pickup truck on I-81 arrested on...