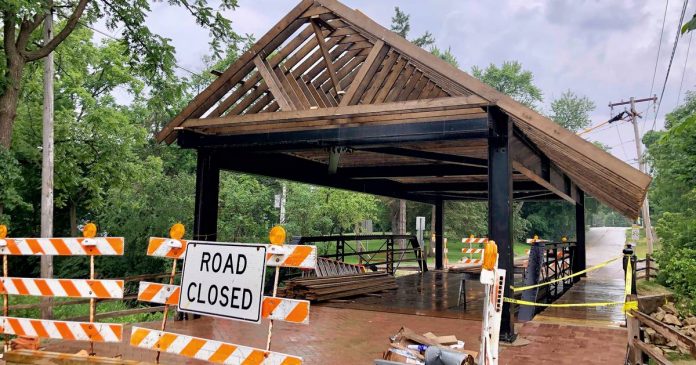 Private fundraising through lemonade stands, donation jars, large contributions and other means resulted in a hefty check for Long Grove to help pay for restoration of a 114-year-old bridge that’s on the National Register of Historic Places.

Long Grove Historical Society President Angie Underwood presented Village President Bill Jacob with a check for $53,496.98 at a gathering under a tent Wednesday adjacent to Buffalo Creek Brewing. The nonprofit historical society started a covered bridge fundraising campaign with a $1,000 donation in March 2017,

“Our downtown looks fantastic and I can’t wait for that bridge to open up,” Jacob said in thanking the historical society for the donation.

The Robert Parker Coffin Road bridge in the village’s downtown was lowered back into place over Buffalo Creek after part of the renovations were completed last month. It awaits its signature wooden cover before making a full comeback — possibly by Aug. 14 — from damage caused by a truck crash two years ago.

Crews removed the historic bridge in March and placed it on a flatbed truck parked off Coffin Road to accommodate concrete abutment replacement and a painting of the span. A steel skeleton has been installed on the bridge and is supporting the start of the wooden cover

Two weeks after becoming a national landmark, the one-lane covered bridge was hit by a box truck on June 27, 2018. It was closed to vehicular and pedestrian traffic for more than two months as a result.

Long Grove officials were considering a bridge renovation well before the crash, but officials voiced financial concerns. That led to the historical society’s fundraising drive involving Long Grove-area businesses, residents and others who were passionate about saving the 114-year-old bridge.

“We had kids have lemonade stands,” she said. “We had merchants have lemonade stands. Merchants put ‘Pennies for the Bridge’ jars out at their stores. We had Scout troops make donations. Kids in middle school sold cookie dough to do a fundraiser for the bridge. We had an artist, Tony Stencel, paint an original watercolor of the bridge and we sold hundreds and hundreds of raffle tickets and that resulted in quite a bit of donations for us, too.”

Constructed in 1906 by the Joliet Bridge and Iron Co., the span is a rare surviving example of a pin-connected pony truss bridge built for an urban setting, according to documents submitted for the national landmark process.

The cover was added in 1972 to help preserve the bridge and limit traffic from trucks and other heavy vehicles.

These Are The Most Disappointing Pickup Trucks Ever