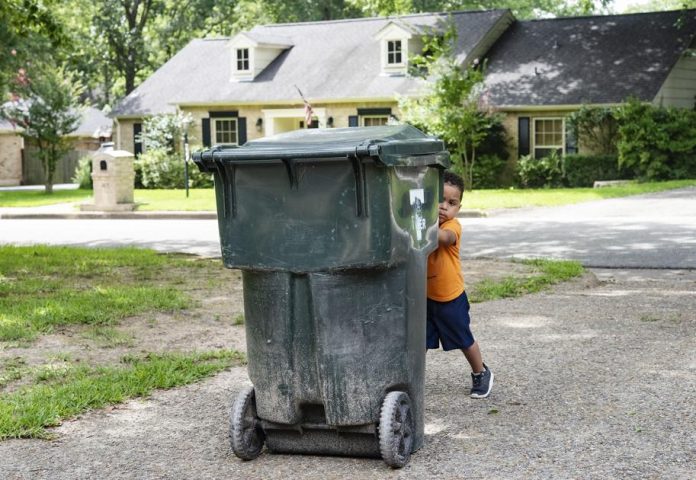 TYLER — Three-year-old Carson Howard runs and jumps with joy when he sees the garbage truck drive down his street on Tuesday and Friday mornings in his Tyler neighborhood.

“Thank you, garbage guys! Bye!” he said with excitement as the garbage men drove away Tuesday after emptying the trash can.

Even though the bins tower over Carson, he works diligently to push the bins to the curb and back twice a week for his neighbors.

His mom, Kristen Mayville, said Carson’s dedication to helping his neighbors shows her how kind he is.

“It makes me happy, because I know that he’s kindhearted and he wants to help others,” Mayville said. “Just keeping the community clean, I guess. Even if we’re out and about, if he sees trash, he wants to pick it up. So I’m just glad that he has a good heart.”

Mayville said Carson helps her clean up their yard by picking up sticks and trash. He has developed a strong work ethic at a young age, she said.

“Hopefully, this will teach other kids to help out with their neighbors. Everybody needs help sometimes and doing a nice, good deed every once in a while,” Mayville said. “You don’t have to spend money or do anything. Just pick up trash or check on your neighbors. If you teach your kids to do stuff, they’ll do it. Good deeds don’t have to cost money.”

Carson has become so well-known by the truck drivers that they blow their horn at him.

Mayville said Carson became interested in garbage trucks when he was 6 months old, but he started pushing the trash cans at 2 years old.

“He just loves the garbage truck, and he picks up all the garbage and takes the garbage cans and pulls up the neighbors’ (cans). And the garbage guys, they’re really cool. They’ll honk the horn for him and stuff. He looks forward to garbage day,” she said.

“At first, I was like, ‘OK, it’s just a phase.’ But no, he has about six or seven garbage (toy) trucks, and he loves just watching the videos and seeing the garbage truck. I think it’s funny,” Mayville said. “He plays garbage trucks, and he has little miniature garbage trucks. He’ll say he’s picking up the neighbors’ garbage, and he’ll call all their names and everything.”

Through his interest in garbage trucks, Carson also became curious about recycling.

“He knows there’s two different trash cans, and so he asked what the orange lid was for, and I told him that’s recycling,” Mayville said. “So he’s learned that we have to save certain bottles and cans for recycling.”

Truck crashes into Little Rock and Gem Shop after accident in...