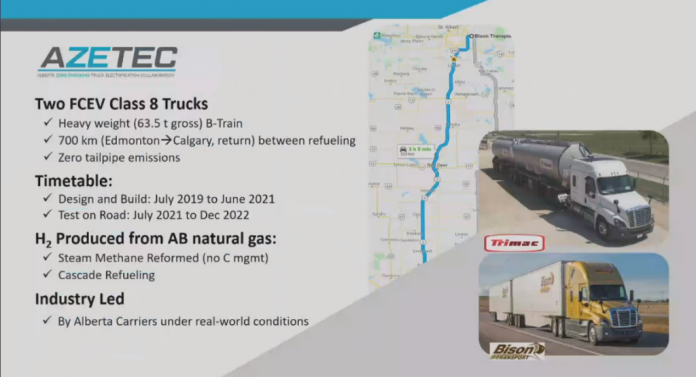 MONTREAL, Que. – Canada has an opportunity to develop a
hydrogen economy as it strives to meet its goal of carbon neutrality by 2050,
but it will need the trucking industry’s help.

And a project is already underway in Alberta to demonstrate the viability of hydrogen as an alternative to diesel in the heavy-duty trucking industry. The Alberta Zero Emissions Truck Electrification Collaboration (AZETEC) project will see two heavy-duty trucks hauling heavy loads at 63,500 kgs (140,000 lbs) between Calgary and Edmonton, Alta. It’s being administered by the Alberta Motor Transport Association.

The trucks require a 700-km range between fueling and will be operated by Bison Transport and Trimac, pulling fully loaded B-trains and twin-53s. Marcel Pouliot, vice-president of industry and regulatory affairs at Trimac, presented details of the project during Movin’ On, a virtual sustainability conference hosted by Michelin June 3.

The first two trucks are in the design stage, and will be
deployed by July 2021. They’ll be tested on-highway until December 2022, with
the goal of ramping up production of hydrogen electric fuel cell trucks, and
the required fueling infrastructure in the years to come.

The hydrogen will be produced using Alberta natural gas
through a steam methane reforming process. The cost of the project will be $17
million, with the Alberta government chipping in $7.5 million through its Emissions
Reductions Alberta program.

Trucks used were Freightliner Cascadia glider kits, with
Ballard Power providing the hydrogen fuel cells and on-board storage systems.
Dana is providing the drivetrain and e-propulsion systems, and will assemble
the tractors at its recently acquired Nordresa subsidiary in Montreal, Que.

Jessica Lof, research lead, hydrogen economy with the
University of Calgary, said there are three objectives to the program: for the
Canadian trucking industry to reduce its reliance on internal combustion engines;
to provide a credible and compelling solution for the trucking sector to pursue
zero-emissions transport; and for trucking to serve as a needed anchor for the
development and distribution of hydrogen in Canada.

“We need to look for transformative systems-level change,”
she said. “Canada is well positioned to leverage our natural resources to be a
producer of hydrogen.”

The steam methane reforming method to initially be used
results in an 80-90% reduction in greenhouse gases compared to diesel. It can
also be produced using renewable electricity, but at a higher cost. Hydrogen
production costs must come in at $3.50-$5 per kilogram to be cost-competitive
with diesel at a pre-tax price of 85 cents per liter. Lof said hydrogen can be
produced in Alberta for as little as $1/kg.

Electricity costs of less than $30 per megawatt hour (Mwh)
make lower-emissions “green” hydrogen production viable, Lof said. To scale up
the project to more than 1,000 trucks, fueling stations will need to be built
along key transport corridors, with the capability of providing one to three
tons of hydrogen per day, Lof noted.

And the trucks themselves will have to be spec’d
differently, right down to the tires which will need to manage higher torque
outputs, Pouliot added. Even pricing will be impacted, with the traditional
fuel surcharge and fuel tax collection methods restructured.