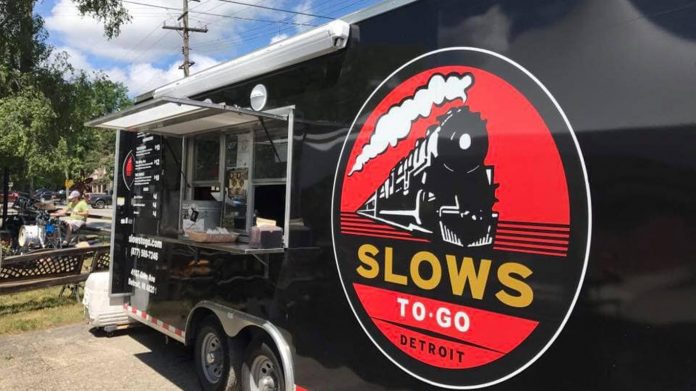 A Slows Bar BQ food truck will make its debut in Canton’s Cherry Hill Village on July 24 after the Canton Board of Trustees approved a pilot program at its July 14 meeting. (Photo: Submitted)

A tasty slice of Detroit will be making Canton’s Cherry Hill Village home for at least a month as part of a pilot food truck program approved by the Canton Township Board of Trustees on Tuesday, July 14.

Beginning July 24, a Slows Bar B-Q food truck — called Slows To Go — will be stationed at select times just west of the fountain at Cherry Hill Village. The decision is unprecedented in Canton, which has disallowed food trucks in the township for more than a few days.

Once the one-month agreement ends, the township and Slows will decide whether to extend the Cherry Hill Village set-up.

The new normal created by the coronavirus pandemic is allowing Canton to adjust its strategies, said township clerk Michael Siegrist.

“Initially, Slows reached out to my office asking for permission to place a food truck near the intersection of Canton Center and Joy roads, in the parking lot of the former union building,” Siegrist revealed. “The township has a no-food truck ordinance, with the exception of special events like Liberty Fest.

“With the COVID crisis, however, we decided to shift our gears. We know our residents want a more walkable community. We suggested Cherry Hill Village as the truck’s location because it is such a booming area of Canton, and Slows agreed.”

During normal times, the Slows food truck would be making its home at summer festivals, graduation parties and wedding receptions, Slows Managing Director Terry Perrone said. However, with engagements limited due to coronavirus-mandated shutdowns, the Cherry Hill Village set-up is ideal.

“We love the Cherry Hill Village venue because of the area’s population density and the fact that it’s growing,” Perrone said. “We’re hoping it works out well at that location and we can extend our stay there, although we never like to put the cart before the horse.”

Slows will pay a $250 fee, which will be deposited into Canton’s Community Improvement Fund.

“This isn’t about the revenue,” Siegrist said. “It’s about bringing additional restaurant options to the community.”

Perrone said the menu will include all of the restaurant’s stalwarts with a variety of add-ons offered daily.

“The customers will dictate, to a large degree, what is on the menu along with our mainstays,” Perrone said. “We want to mix it up for our regular customers.”

A Tougher Jeep Is a Better Jeep • Gear Patrol