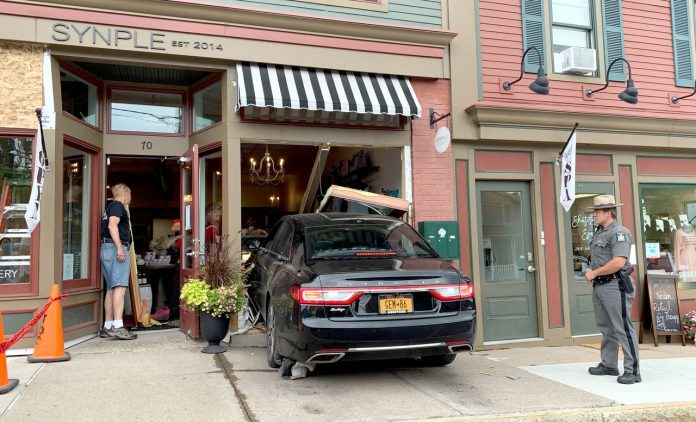 Camillus, N.Y. — A car plowed through the front window of a Camillus boutique Thursday afternoon, narrowly missing customers browsing through clothing, jewelry and other accessories, the store owner said.

Synple’s owner, Kelly Landau, told syracuse.com | The Post-Standard that everyone inside — two workers and two customers — screamed when the car revved its engine and crashed through the front window, stopping 6 to 8 feet inside the store.

“Two customers had just walked away from that area like five seconds before,” Landau said. “Another customer had just left the store and walked through that area.”

It turned out that the two women in the Lincoln sedan were pulling into a parking spot around 1:30 p.m. to shop at Synple, l70 Main. St. Landau said she believes that the driver accidentally hit the gas.

The two occupants were “super frightened” but not apparently injured, Landau said.

In the split-second crash, Landau heard the engine revving and the car crashing through the wall before everyone screamed.

“I went into shock,” Landau said. “I had customers in the store. … I was very close. I very calmly took the customers out back of store. ‘OK, everybody run out the back door.’ We were good to go.”

It’s been a tough couple of weeks for the store, which opened at that location in November 2018 and specializes in eclectic merchandise with a “New York City vibe.”

On July 5, a pickup truck lost control coming down the hill into the village, hitting the side of the shop. That damage is still visible, Landau said.

Landau estimated that Thursday’s crash caused $5,000 in damaged merchandise, on top of the damage to the shop itself.

But Landau said she’s just glad that no one was injured. “It could have been a lot worse,” she said.

After rescue workers yanked the Lincoln from the store, workers spent the rest of the afternoon cleaning up the store and repairing the front of the building.

State police are investigating the crash.

Johnson tells EU agree to deal or move on | The...

With community’s help, Millersburg market gives away thousands of pounds of...