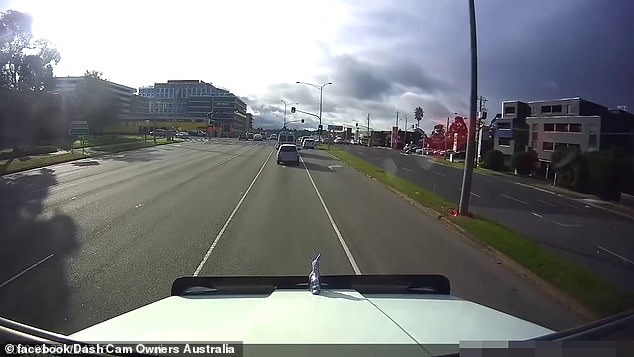 A collision between a truck and a car at a yellow light has sparked furious debate over who was in the wrong.

The rear-end collision was captured at the intersection of Warrigal Rd and Princes Highway in Oakleigh, Victoria, on August 23.

The footage showed a silver Subaru hatchback slamming on its breaks at a yellow light after passing a solid white line while turning right.

The nose of the truck can then be seen hitting the rear of the vehicle, which pushed it further into the intersection.

The footage divided viewers, with some saying the truck driver should have slowed down when approaching the intersection, while others said the car was at fault.

‘Both are at fault. The car should’ve continued through the intersection (and) the truck should have stopped for the yellow light,’ one person commented.

‘Horribly driving from the Subaru … The rule is “stop if safe to do so” for a yellow light. It was clearly not safe to do so with a truck behind you. Regardless if the truck would have run the light or not, the Subaru shouldn’t have stopped,’ another said.

Online users were also quick to point out a motorist’s responsibility to travel a safe distance behind a vehicle in front while driving.

This distance is usually much longer than a car length or about two seconds behind a vehicle in ideal conditions.

An additional second should be added for every three metres of trailer length, such as when towing a trailer or caravan. 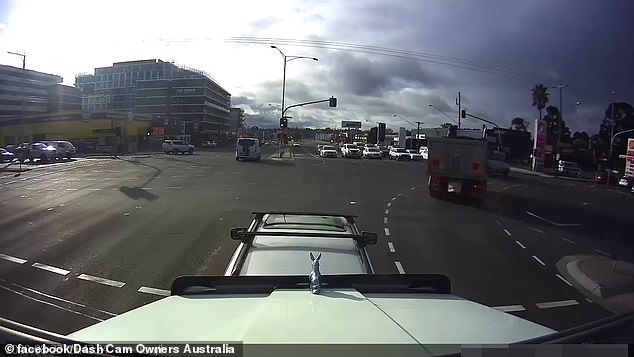 The nose of the truck can be seen hitting the rear of the vehicle, which pushed the Subaru further into the intersection after it abruptly stopped (pictured)

Who do you think was at fault?

‘The front of the car had already reached the stop line when the light turned amber,’ a commenter said.

‘Physically impossible for the car to stop in accordance with the regulations and should have kept going through. Need to stop before that line.

‘Unfortunately for the truck driver, that doesn’t negate his/her liability for not keeping a safe distance.’

‘There could be any number of reasons why the car stopped suddenly, including a brain fart. It doesn’t matter because the vehicle following has the responsibility to avoid the collision,’ another added.

‘A driver is required to leave a safe distance between traffic and stop on orange when safe to do so – again, trucking trying to run red,’ a third comment read.