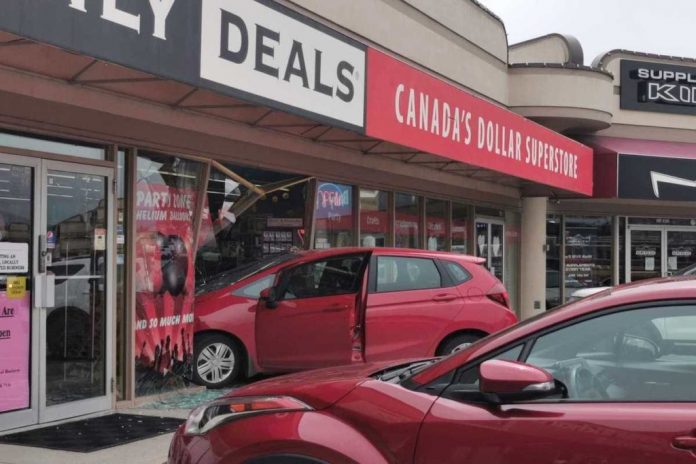 A red car smashed through the front window of a dollar store in Dilworth Shopping Centre on Friday afternoon.

Emergency crews were called to the crash at about 1:45 p.m. at the shopping centre just off Highway 97 North.

According to those on the scene, there was only one occupant in the car and they were treated by BC Ambulance for minor injuries.

Platoon Capt. Shayne Kiehlbauch said the driver was shaken up from the incident.

A witness told firefighters that the driver pulled into a stall, stopped, then suddenly accelerated through the store’s glass window.

The airbags inside the vehicle were not deployed.

A tow truck will be called in to remove the car from the window of Canada’s Dollar Superstore.

It’s unclear what caused the vehicle to drive through the storefront.

Witness on scene says driver nor anybody inside the store hurt. Crews cleaning up. Police leaving the scene. pic.twitter.com/8DAOe0yFhm