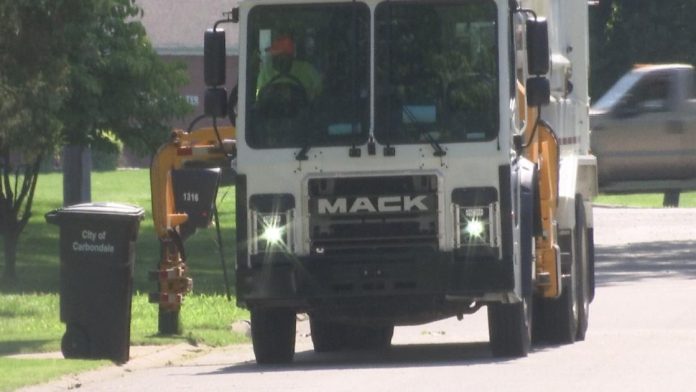 CARBONDALE, IL — The city of Carbondale, Illinois, has made changes to its trash services. Now, the city wants to make sure folks know what to do, so their trash doesn’t get left on the curb.

“With the fully automated service, it’s a one-man operation. Each person stays inside of the truck at all times. An arm reaches out and dumps inside the truck. There’s nobody riding on the back with our semi-automated service,” Carbondale Refuse and Recycling supervisor Loren Polley. ” Now, it’s more important for cart placement than it was before because the guys were physically dragging them over to the truck. Now they’re not doing that.”

Fotios Karayiannis learned from a mistake, but he got it right this time. “I had to move it back and forth. It was smelling. That was the bad part about it, but that was one time. Today, I was aware of what was going on, so I put the trash can the way they wanted, and that’s fine. It’s simple. It doesn’t require that much attention,” said Karayiannis.

The city is asking residents to face their trash carts forward and not close to their mailboxes or other bins. “When they face the opposite direction, it will turn trash out in the yard or back in your cart, and we can’t get you fully empty,” said Polley.

Polley said the new trucks will also save the city money and prevent injuries. “The drivers hardly get out anymore. That’s the way of the future. With operation changes like this, it’s always a plus. You don’t have your guys that are prone to injuries on the back of the truck with high-speed traffic,” said Polley.

If you notice your trash hasn’t been take and you have questions, you can call the Carbondale Maintenance and Environmental Services office at 618-457-3275.

This is The Wildest Chevy Colorado Out There