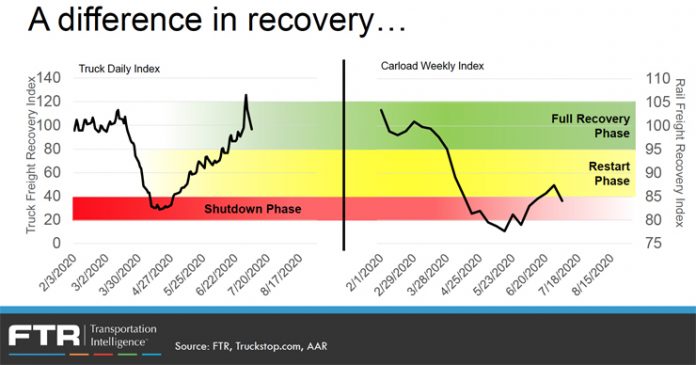 BLOOMINGTON, Ind. — Railroad carload traffic remains subdued, even though by some measures truck volume has returned to pre-pandemic levels, according to a freight forecasting firm’s analysis of volume trends

Does this mean railroads will lose market share to the highway, just as they did coming out of the Great Recession of 2008-09?

It’s too early to tell, said Todd Tranausky, vice president of rail and intermodal at FTR Transportation Intelligence, during the firm’s “State of Freight” webcast today. Tranausky did note, however, that before the pandemic struck many shippers were upset with Class I railroads and took advantage of loose truck capacity to shift loads to the highway.

“Railroads’ key to keeping and growing market share is going to be their ability to keep service levels at or near where the levels are right now, and not see the typical degradation … when volume picks up and things get tight,” Tranausky says. “If railroads deliver consistent service, then market share will take care of itself.”

Currently FTR’s truck freight recovery index shows volumes roughly equal to before the pandemic. Carload volume, while up since May, remains at just 85% of pre-pandemic levels, FTR says.

Part of the rail-truck volume recovery gap can be explained by what drives demand for trucking and carload traffic.

FTR does not expect carload volume to recover anytime soon.

“We’re getting back to the less-worse numbers but we’re nowhere near where we were before the pandemic,” Tranausky says. “And we expect that to continue through the balance of 2020 and into 2021. The carload markets aren’t going to bounce back. We’ve seen a very slow ramp up in industrial activity.”

Trucking industry capacity, measured by rigs with drivers available to move freight, remains well below the long-term average. Capacity is expected to be loose through at least May of next year. And that spells trouble for domestic intermodal volumes.

“That’s going to make it harder for intermodal to be competitive,” Tranausky says.

Tranausky noted that the pandemic has had a “crushing impact” on railroad employment. Rail employment has fallen 17%, or by 30,000 workers, over the past year, he notes, but nearly half of that drop, or 14,100 jobs, came since February as traffic slumped due to the pandemic.

The numbers would have been worse had it not been for the Paycheck Protection Program that helped small businesses retain employees. Some 91 short line and regional railroads participated in the federal loan program, saving just over 5,000 jobs, FTR says.

More economic turmoil may be around the corner. Surging COVID-19 infection rates in several states — including Texas, California, and Florida — could require shutdowns of businesses and curtail consumer demand, which would threaten a significant percentage of U.S. economy activity and hurt freight volumes, FTR CEO Eric Starks says.

BUZZER-BEATER: Anunoby and Lowry give Raptors a new life