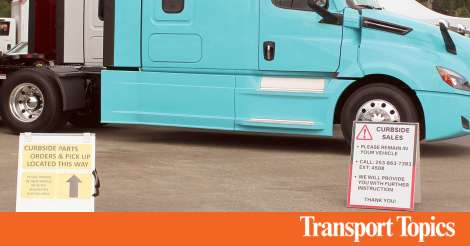 As COVID-19 spread across the country and the number of cases began to spike, some trucking companies and truck dealers made significant operational changes in their maintenance shops to prevent exposure to the virus.

Refrigerated carrier Prime Inc. and truck dealer Freightliner Northwest, for example, implemented several key measures to protect the health and safety of their employees as they work to keep the nation’s supply chains up and running.

And they didn’t have to sacrifice productivity to do so.

In fact, Freightliner Northwest saw significant improvement in average repair times in the two months after closing public access to buildings at its 12 locations and implementing curbside service, according to Sean Bolan, continuous improvement coordinator.

The percentage of repairs completed within 24 hours increased to 69.5% in May, up from 60% prior to implementation, Bolan said. Also, the average amount of time to complete repairs decreased by 39%.

Kevin Bergman, director of fleet maintenance for Prime, said its drivers and driver support personnel achieved 100% on-time deliveries in May. Meanwhile, as of late May, Prime has seen only 19 positive cases among more than 10,000 drivers.

The company’s founder and president, Robert Low, “took this very seriously from the get-go,” Bergman said.

Prime began requiring employees and visitors to all of its facilities, including the three main terminals in Springfield, Mo., Salt Lake City and Pittston, Pa., to undergo daily temperature checks and to answer health questions upon their arrival. They were also required to wear masks and gloves at all times. Company officials began holding weekly safety meetings online by posting them as videos to the company’s YouTube channel. The company added a popular segment featuring the company’s medical consultant, Dr. John Abraham, in which he explains the latest developments regarding coronavirus and answers related health questions.

A Prime Inc. technician works on a truck. (Prime Inc.)

In its maintenance shops, Prime adopted significant changes in how technicians work, according to Bergman.

The company’s technicians now work in smaller teams of four or five, with each team taking breaks and eating lunch together. This team approach limits the impact to the rest of the shop if one person becomes exposed to COVID-19, Bergman explained. In the past, the maintenance shop operated with two 12-hour shifts since it is a 24/7 operation. Bergman said those shifts since dropped to 11 ½ hours so that the day and evening shifts don’t mingle, further reducing the risk of exposure.

“I told our shop associates, ‘Guys, [these changes] might be a little overkill, but Robert is looking out for our interests,’ ” Bergman said. “We want our drivers out on the road making money, not in the hospital.”

Bergman said Prime’s employees understand that compensation is tied to the success of drivers, so when drivers make more money, they too earn more. That’s why Bergman prefers to look at what impact the shop and his mechanics are having on uptime and cost per mile rather than just shop productivity.

During the pandemic, Prime has seen a significant decline in the number of trailers coming through its terminals, he said.

The Springfield terminal, for example, normally sees about 1,500 trailers per week for issues ranging from scuffing to problems with refrigeration units, but in some recent weeks that number declined to 900 or 1,000.

Bergman said the maintenance shop could see that this deferred maintenance on trailers would eventually inundate them later. So, they came up with ways to increase capacity by putting into place programs such as cross training.

Tractor and trailer techs are now cross training so that when there are more trailers than tractors to repair in a given week, the shop can draw upon its tractor technicians to help with the trailer workload, Bergman said.

Technicians are also now scheduled on a rotating basis to visit with drivers when they arrive at the terminal plazas and to inspect their trucks and trailers and recommend repairs.

“Our drivers really like the courtesy check because it does two things: it keeps our DOT issues down and it’s increasing our revenue because now the equipment doesn’t have to go to an outside shop for repair,” he added.

Similar to Prime, Freightliner Northwest also moved quickly to adopt operational changes at its dealerships with the goal of helping drivers to stay on the road making money, while keeping its employees safe.

“When the COVID-19 pandemic first hit, we were early in the timeline in Washington state,” said Patrick Gendreau, chief operating officer for Freightliner Northwest. “Being a dealership operating primarily in the Pacific Northwest, our owners and leadership took it seriously right out of the gate. Early on we made the decision that we were going to operate curbside and close the outside doors to external visitors.”

Starting with its Pacific, Wash., location in late March, Freightliner Northwest required visitors to call before or upon their arrival to the facility for parts or service support. When visitors arrive, they must call into the store and an operator answers, determines the purpose of their visit and places those calls in a queue displayed overhead inside the facility. Employees in the parts and service departments then answer their calls in the order they were received, determine the parts or services they require, then after donning masks and gloves, greet the visitors outside if necessary.

Gendreau said at the time the company made this decision, Washington Gov. Jay Inslee was considering a statewide order to close all but essential businesses. And while company officials knew its locations in Washington state, as well as those in Oregon, would likely be considered essential businesses and be allowed to remain open, they still chose to close the doors to external visitors.

Desiring to take a consistent approach companywide in closing facilities, Freightliner Northwest expanded that strategy to its 11 other locations in April. Company officials also chose to close all driver amenities such as showers and laundry facilities.

Planning and executing the curbside strategy turned out to be a far less easy undertaking, said Dan Greenwood, regional operations director for Freightliner Northwest. Starting in mid-March, a team of employees and managers met over two days to map out the process.

“I did a count and early on we ended up either creating or rewriting 29 different processes,” Greenwood said. “It was kind of daunting.”

The team came up with the new call-in process. Greenwood said that Freightliner Northwest for some time had intended to adopt such a greeting and routing system for in-person visitors, but the pandemic accelerated its design and implementation.

The pandemic also made it much easier to implement will-call, Bolan added. “Customers order in advance and they are here to just pick up their parts. That’s something we wanted to do curbside for a long time. This pandemic stuff has made it possible to complete that change.”

“Pretty much every vehicle when it comes in is sanitized before it is serviced and then prior to pick up, we sanitize it again,” Bolan said. “A big part of that is not only protecting our customers, we’re also protecting our employees — addressing our own employees’ anxiety and concerns.”

Bolan said during the early days of the pandemic, Freightliner Northwest developed a three-hour quarantine where the truck sat until it could be wiped down. In addition, the company implemented a fogging system that sprays the truck’s interior with an EPA-registered disinfectant that has proven to be far more effective, faster and more reliable, he added.

Now that different parts of the country are experiencing a range of infection rates with businesses preparing to return, Gendreau said reopening procedures may vary for each location. He noted it makes little sense to try to employ a one-size-fits-all approach to reopening companywide. Since Freightliner Northwest operates in rural locations of Washington and Oregon, any decisions on opening those stores will be based first and foremost on actual infection rates and local health officials’ recommendations for the safety of employees and visitors.

“When we closed the stores [to foot traffic], we all jumped into the pool together,” Gendreau said. “But as we reopen … maybe some of these other stores in these more rural areas may be able to change their processes and open up a little more before we do here on the I-5 corridor.”

‘This monster of fire’ burns a devastating path through one family’s...

Travel and entertainment trends in Europe are 'encouraging' signs for U.S....