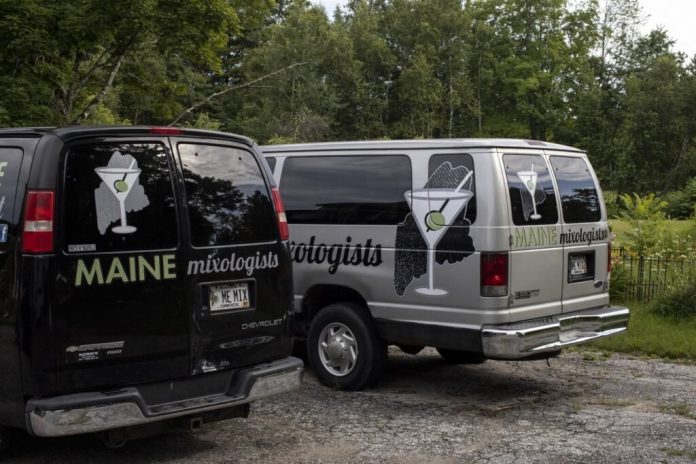 As the COVID-19 pandemic tightened its grip on life as we know it in the spring and early summer, David Golden, co-owner of Rustic Taps & Catering in Gorham, watched anxiously as 90 percent or more of his business for the rest of the year vanished.

The staff at Black Tie Catering in Portland usually works about 50 weddings a year. All but a handful of brides have changed their minds about walking down the aisle in 2020.

The last wedding catered by Blue Elephant Catering in Saco was Feb. 29. Then the phone stopped ringing – except for people calling to postpone or cancel.

“We’ve had nothing since then,” said Reuben Bell, president of the company. “Just complete crickets.”

It’s wedding season, a time when the Maine landscape usually blossoms with big tents, seaside photo shoots of brides and grooms, and a cornucopia of catered hors d’ouevres, signature cocktails, towering wedding cakes, and stunningly plated (check one) beef, fish or poultry. But the pandemic has dashed many a bride’s dreams of her big day. It’s also canceled graduation parties, corporate events, festivals and fairs. And the caterers who feed people at these celebrations? If you think the coronavirus isn’t scary, just look at their books.

But caterers are fighting back against the disruption caused by the virus, urging clients to postpone events instead of canceling them, and starting side businesses to help pay the bills until the pandemic is over.

“We’ve got a huge collection of mostly small businesses here in Maine who run on fairly short margins, and to refund an entire season’s worth of wedding deposits would bankrupt most of us,” Bell said.

Early in the pandemic, Bell got money from the Payroll Protection Program so he could keep a core staff, and he is relying on profits from 2019 to keep the company going. Bell also launched a campaign called #postponedontcancel. The idea was not only to convince clients to postpone their events for a year, but also to put a face on the economic devastation in the industry. And, Bell said, it was “a way to encourage our colleagues. Everybody was so emotionally drained.”

Blue Elephant shot photos of caterers and other small business owners financially dependent on weddings – photographers, bakers – then combined them into a composite photo. They also hired a videographer to make a short film to send to clients. In the film, caterers recite lines such as “Love isn’t canceled” and “Any great party is worth the wait.”

The strategy worked. Of the 75 weddings scheduled between April and November 2020 with Blue Elephant, only one canceled. The rest postponed until next year.

The rest of this year, Bell says, he will be treading water financially. The company has booked a dinner party for 16, a small wedding in early August, and then one more in late September. Keeping his head above water until 2021, he said, “will be challenging, I’m not going to lie.”

James Filtz, director of meetings and special events at the Ritz-Carlton in New Orleans and vice president of the National Association for Catering & Events, said weddings and other social events are actually turning out to be the “most resilient” segment of the catering business nationally. Some events are going on this year as planned, but they are smaller or set up in a different way. The sector suffering most, he said, is corporate events because so many corporations have restricted employees’ travel.

Meanwhile, Maine caterers – like restaurants and breweries – are finding clever ways to bring in new income. Golden’s Rustic Taps & Catering has transformed three vintage food trucks into mobile bars with multiple taps. In normal times, he uses the trucks at parties, fairs, festivals and corporate events, transforming spaces into beer gardens with bourbon barrel tables. When the pandemic hit and those events were canceled, he got a PPP loan to pay some of his staff (he’s down from 23 staffers to fewer than 10). To give them work to do, he started a mobile, wood-fired pizza business that goes into neighborhoods. He’s kind of like the ice cream man, only he parks in one spot and hungry neighbors come to him.

Golden keeps the pizza truck 20 feet back from customers, and asks them to drive up to a separate pick-up area to retrieve their food. All ordering and payment is done online.

“We staggered pick-up times so that we could do roughly about 15 pizzas every 10 minutes,” Golden said.

The downside? He was no longer able to serve alcohol, which had been at least 60 percent of his business. It wasn’t cost effective, given that gatherings of no more than 10 were allowed at that time and the smallest keg on Golden’s truck holds 76 glasses of glasses of beer.

Golden charges $16 to $20 for a pizza with organic ingredients, which, he said, at a catered party would go for $35 per head, plus rental fees.

On the positive side, Golden said, the pizza truck has opened up a whole new demographic “with people who can afford a food truck as opposed to catered, wood-fired pizza.”

In early June, Gorham chiropractor Rob Lavoie organized a pizza night for the subdivision where he lives, rounding up customers for Golden on the neighborhood’s Facebook group.

“All of our neighbors were just tired of the whole house-arrest COVID scene,” Lavoie said, “and were looking for something different.” And they were happy to be able to help a local business.

Golden parked his truck in Lavoie’s driveway and Lavoie allowed him to plug into his house for electricity. Lavoie said it was a “really efficient and neat and very safe set up.”

Neighbors took their pizzas back to their homes to eat, then returned later for s’mores, “which were a huge hit,” Lavoie said.

He only wishes there had been beer. Good news: Golden recently started serving beer again, now that the state allows gatherings of up to 50 people.

Golden will need the extra income to offset the losses elsewhere in his operation. “We’re not having the truck rental fees,” Golden said. “We’re only charging for the food. And I don’t know if I’ll be able to survive on food truck prices without rental fees.”

Laura Cabot, owner of Laura Cabot Catering in Waldoboro, has seen 85 percent of the events she booked for this year disappear. A few canceled, most postponed, and a few couples decided to get married anyway, hosting a smaller party featuring Cabot’s curbside pickup food and postponing the big celebration until next year. In one case, a 300-guest wedding turned into a barn dinner for 20.

Cabot expanded her curbside pickup after she noticed it’s the fastest-growing segment of her business. She sells dishes that are best served room temperature – things like poached salmon, beef tenderloin, and summer salads without mayonnaise – and supplies garnishes and instructions.

Cabot also moved into a new satellite office and rents her old office building next door to her home on Airbnb. She offers private catered dinners on the porch, “and that’s getting a little traction,” she said.

Avery Richter, executive chef at The Black Tie Company, believes that the diversity of her company’s business is helping it weather the pandemic. Black Tie not only offers catering, it owns Union Kitchen, located on Union Wharf in the Old Port, which sells grab-and-go foods, groceries, beer and wine, and serves breakfast and lunch. Black Tie also caters a series of farm-to-table dinners every summer, and runs the kitchen/café at Pineland Farms and the café at the Portland Museum of Art.

When the pandemic got underway, Black tie closed the PMA Café and the Pineland Farms Kitchen and sent all the staff to work at Union Kitchen.

“Even though our catering business is kind of obsolete right now,” Richter said, “the Union Kitchen retail market location is what people were looking for … with minimal human contact and minimal time in a store. No one needed to wait in lines.”

Richter said Black Tie still has some weddings scheduled for 2020, but they “are in a kind of limbo.”

Couples, she said, “want to have their wedding, but they’re just waiting to see what will be safe for them, for their guests. But the majority of our events were postponed or canceled.”

Richter said that although Black Tie is known for catering larger events, the company is now marketing itself to potential clients as a small caterer that can do “intimate barbecues or summer parties, and accommodate them at a lower cost or budget than they may have thought.”

Black Tie has also entered into a new partnership with Get Maine Lobster, which is located at the end of Union Wharf. The caterer supplies Get Maine Lobster with whoopie pies, and has teamed up with them on lobster roll and taco boxes. Get Maine Lobster provides the shellfish, while Black Tie supplies the rolls and tarragon truffle Maine sea salt butter for the lobster rolls, and a recipe and ingredients for lobster tacos. Ben Gagnon, a head bartender for Maine Mixologist, set up this boat bar for a wedding last summer. This summer, many brides and grooms postponed, or greatly downsized, their weddings. Photo by Ben Gagnon

Misty Coolidge, the owner of Maine Mixologist, a bar service based in New Gloucester, also cites diversification as the key to surviving the pandemic. Maine Mixologist usually caters 75 to 100 events every year. More than half of the weddings the company had scheduled for this summer and fall have been postponed. She has 24 left on the books for September through November, and just picked up a wedding for July.

A few clients, she said, have converted to backyard weddings and wanted to make their parties BYOB affairs. Coolidge tries to convince them a bar service is the smarter option, even for a small soiree.

“If you’re going to serve alcohol for 50 people at your home, do you want to take on that liability yourself?” she said. “If somebody should leave your home and heaven forbid something happens to them, it’s your home.”

Coolidge also owns a wedding venue, Coolidge Family Farm in New Gloucester. Out of 28 weddings on the books for this season, three have canceled, 15 have postponed and the rest are going on as planned.

Coolidge has gotten creative with the four-and-a-half acre farm, which has a few private cottages at the back of the property. She’s created anniversary packages, which she is marketing to couples who married at the farm in the past. The packages include an overnight stay, a dinner prepared by a chef in the wedding barn, and a movie shown on a large outdoor screen. She’s hosted three couples so far, and five others are booked.

Coolidge is not only confident she’ll make it through this dry spell, she considers it, in a way, a “blessing in disguise.”

“All summer I have no life from May through November,” she said, “so having a summer with my kids is awesome.”

Please check your email to confirm and complete your registration.

Use the form below to reset your password. When you’ve submitted your account email, we will send an email with a reset code.

Green Plate Special: A tropical rhizome finds its way to a Bowdoinham farm

Maine Gardener: In a tough season, the garden has been a blessing