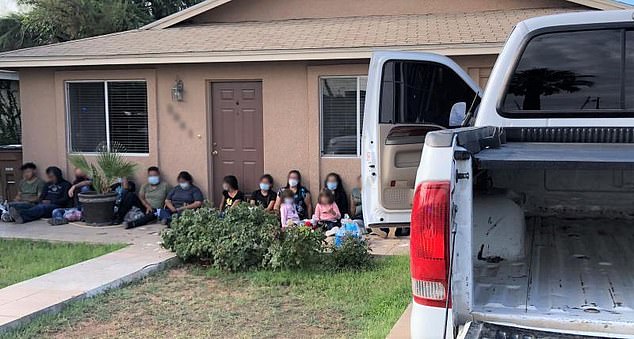 Agents from U.S. Customs and Border Protection rescued 30 undocumented Mexican immigrants from the locked flatbed of a pickup truck when its driver abandoned it on a residential driveway in Arizona.

CBP agents were alerted of a suspicious vehicle in the border town of Douglas last Monday.

The driver of the pickup avoided the agents when they attempted to stop him, before abandoning the vehicle in the driveway of a home.

Pictured above are some of the 30 migrants who were found trapped inside an abandoned pickup truck in Douglas, Arizona, after U.S. Customs and Border Protection was tipped off about a suspicious vehicle transiting through the border city. The migrants, all from Mexico, were processed and deported

Upon conducting a search of the pickup truck, CBP agents found the large group of men, women and several children crammed inside the locked flatbed.

A CBP spokesperson told DailyMail.com that the driver has not been located.

The undocumented immigrants were detained and processed before they were immediately deported to Mexico under Title 42, which was signed by the White House in March on the heels of the COVID-19 outbreak.

Under Title 42, ‘CBP is prohibiting the entry of certain persons who potentially pose a health risk, either by virtue of being subject to previously announced travel restrictions or because they unlawfully entered the country to bypass health screening measures.’

Tucson Sector Chief Roy Villareal said: ‘Smugglers have long disregarded the safety of migrants. Now, during the pandemic, they not only risk the lives of migrants, they risk all of our lives by shoving migrants into vehicles without social distancing, without facial masks, and without any regard for the exposure of COVID-19 to other migrants and public at large.

‘They show no regard for the lives they exploit, our workforce or the communities our agents strive to protect in the midst of this public health crisis.’

Pedestrian struck and killed by pickup truck in Plateau