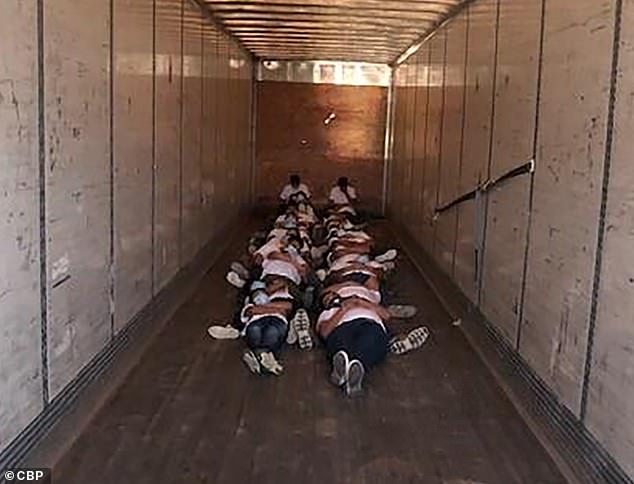 A team of U.S. Customs and Border Protection officers discovered 28 undocumented immigrants inside a tractor trailer Monday in Texas.

CBP said in a statement that the incident took place while North Laredo Border Patrol agents stopped a truck hauling a white trailer on Interstate 35.

The federal immigration law enforcement agency said a sniffer dog was used to conduct a search of the truck, detecting the presence of the migrants, who had unlawfully entered the United States from Mexico.

A photo distributed by CBP showed a majority of the migrants wearing face masks.

CBP discovered 28 undocumented migrants from Ecuador, Guatemala and Mexico on Monday in Laredo, Texas, after they crossed the Mexico-United States border while hiding in a trailer hauled by a truck

The individuals were identified as citizens of Ecuador, Guatemala and Mexico and were taken into custody and processed, per federal guidelines.

CBP also detained the driver of the truck, a United States national.

The agency said that human traffickers are disregarding the safety of the individuals they are smuggling across the Mexico-United States border by stuffing them into trucks.

‘[The smugglers] put at risk the health and safety of our Nation,’ CBP said. ‘U.S. Border Patrol agents strive to prevent the flow of illegal immigration and slow the spread of COVID-19.’

On Tuesday, Immigration and Customs Enforcement [ICE) announced it  would release 693 migrants who are at most risk of a coronavirus outbreak at their detention centers including immigrants who are elderly, pregnant, or have underlying conditions.

The decision comes on the heel of mounting pressure from Democrats and pro-immigrant groups who have demanded the mass liberation of more than 34,000 who are incarcerated and remain at risk of contracting the deadly coronavirus.

In a measure to tighten and enforce the unlawful entry of migrants, President Donald Trump’s administration has relied on a seldom-used public health law to set aside decades-old national and international immigration laws.

Those seeking refuge in the U.S. are whisked to the nearest border crossing and returned to Mexico without a chance to apply for asylum. It may be the most aggressive clampdown on immigration by a president who’s made reducing asylum claims a top priority.

U.S. Customs and Border Protection said last Thursday that nearly 10,000 Mexicans and Central Americans have been ‘expelled’ to Mexico since the rules took effect March 21.

Mark Morgan, the agency’s acting commissioner, said the changes were ‘not about immigration.’

The administration tapped a law allowing the head of the Centers for Disease Control and Prevention to ban foreigners if their entry would create “a serious danger” to the spread of communicable disease. The U.S. has the most confirmed cases in the world by far.