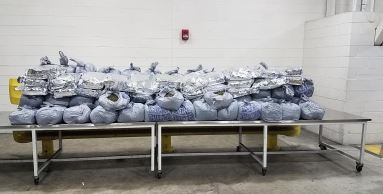 DETROIT, Mich. — U.S. Customs and Border Protection (CBP) officers have seized 440 pounds of the stimulant khat from a truck heading for Canada, the agency said Tuesday.

It said officers at the Port of Detroit were conducting inspections of vehicles leaving the U.S. via the Ambassador Bridge when they selected a commercial truck for additional examination.

Officers then discovered what was later determined to be khat concealed in cardboard moving boxes, the agency said.

The chemicals found in khat, cathine and cathinone, are controlled under the Controlled Substances Act.

“Whether entering or exiting the United States, CBP personnel work tirelessly to ensure the integrity of our shared border with Canada,” said port director Devin Chamberlain.

“I’m proud of the continued successes our officers have in keeping illicit drugs from crossing our borders.”

Khat chewing is popular in many parts of East Africa and the Arabian Peninsula. In Yemen, it is a practice that dates back thousands of years, according to the World Health Organization.

Jeep Gladiator Overlander Farout concept is your home on a truck