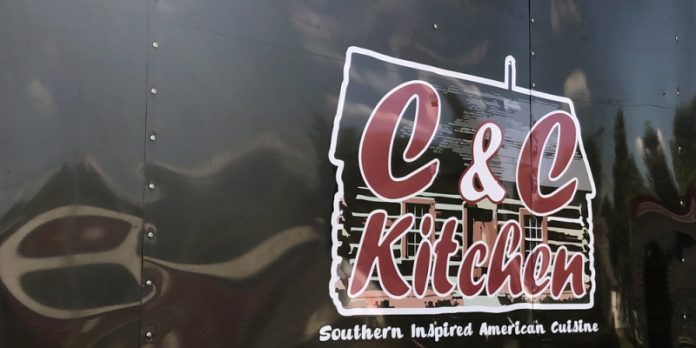 I know I’m not alone in lamenting the loss of ideal drinking and dining this summer. As we’re all some of us are adapting to our new reality, we can still take advantage of food trucks offering affordable, fast, and delicious food we can enjoy outdoors. The C&C Kitchen food truck is one of these offerings. It’s consistent in a way many food trucks haven’t been in C-U.

The C&C Kitchen food truck is owned and operated by Curtis and Cameshia McGhee; it’s one of just a handful of Black owned restaurants in C-U. The menu is “Southern Style American Cuisine” and changes each day. You can find the truck at 708 E. Main Street in Urbana, Tuesday through Saturday from noon to 5 p.m., but most of the food is sold out by 3 p.m. All of the daily details are posted on Facebook, so be sure to follow along.

C&C is a really great lunch option because it allows you to not only leave your house or office, but also provides a filling meal that can get you through the rest of the day, though if you’re not careful, you will be done for the day. Maybe consider it a late lunch, with the option to bow out of high-focus responsibilities for the rest of the day.

My husband and I visited twice in the last few weeks. Our first visit was on Juneteenth, and we took advantage of the specials for the day. We had the smoked sausages, which were basically fancy hot dogs ($6). The meal was served with two sausages and a side; $6 was an incredible deal. We also ordered a side of fried okra ($3) and peach cobbler ($8).

The sausages were exactly what I’d expected: they were salty and meaty and nicely grilled. The fried okra was perfectly battered. Okra isn’t my favorite vegetable, but I could eat a whole lot of this fried okra. It was great. There was a little left over, and I reheated it in the oven the next day, and it was still good.

Our favorite bites, though, were the French fries. The straight fries were super hot and crispy, clearly made to order. They were still hot by the time we made it back to our house in Champaign; that’s no small feat. The little bit of seasoning on top made them a little more special.

After eating all that, we didn’t have any room for the peach cobbler, so we saved it for later that night. More than enough for two people, it was served in a disposable tin pan, making it easy to reheat at home. I popped the entire thing in the oven for a few minutes to warm it up, and I’m glad I did. It was delicious. It had the right ratio of pastry to filling. The filling was nicely spiced and sweetened, and there wasn’t too much liquid. The hubby ate his plain, but I added a little bit of whipped cream. It was the perfect way to end the evening.

Last week I headed back to grab some lunch. The menu was different, but there were several $10 meal options. Hubby ordered wings and fries ($10), and I ordered the vegan soul bowl ($10) plus a side of dirty rice ($4).

There wasn’t anyone else at the truck when I placed my order, but since the wings take about 15 minutes to make, I waited in my air conditioned car. When I went back to the truck to pick up my food, there were about six or eight people waiting to collect their food or order. Everyone waiting was wearing a mask. My order was up quickly and I drove home.

Once again, the food was still hot when I got back to Champaign; everything seemed made-to-order on this second trip, too. The wings (five of them, whole) were delicately seasoned and, perhaps most importantly, not too salty. I was looking forward to snatching a few of my husband’s fries, since we liked them so much last time, but these ones were not all that great. They were crinkle cut, which is fine, but they were soft, soggy, and a little oily. They just weren’t cooked long enough. Even though the fries were disappointing, the wings were more than enough for my spouse.

The vegan soul bowl was wild grains served with vegan Italian sausage-flavored “meat” balls, grilled veggies, and a sweet and mustardy sauce. The vegan balls seemed to me like they were not made in house but rather came frozen — this did not bother me one bit. I appreciated that they were an even texture and well seasoned. I thought they were quite tasty and well cooked. The veggies included broccoli, mushrooms, snap peas, and mini bell peppers. They were all cooked to tender-crisp and had a really nice char on them from the grill. The char flavor really made the entire dish. I also enjoyed the sauce; it was well balanced and worked nicely with the grains and veggies. While I enjoyed the vegan meatballs on their own, I didn’t love them with the sauce. The fennel and Italian seasoning didn’t really work with the sweet tang of the sauce. The grains were nicely cooked and incredibly filling. I really enjoyed this meal, and I very much appreciated that there was a vegan option.

After eating all that food, we had no room for the dirty rice, so we saved it for dinner. It was really good and nicely seasoned.

C&C Kitchen serves really fantastic food at affordable prices. The $10 meals are a lot of food: you’re getting more than you pay for. If you want a lighter option, I suppose you could save half for dinner; congratulations, if you have that kind of self control. I certainly do not. I appreciate that the Facebook page is regularly updated with daily menus and a phone number you can call to place an order ahead of time. The McGhee family knows what they’re doing in the kitchen, and we’re all lucky to have such tasty food available to us.

HDMA Pulse Webinar: Amid uncertainty, light at the end of the...