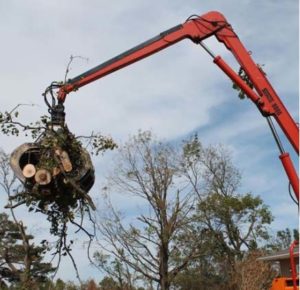 Cedar Rapids continues work on picking up trees dropped by the derecho.

Thursday marks one month since the derecho tore across Iowa and left thousands of downed trees in its wake.

Cedar Rapids City Engineer, Nate Kampman, says they have made progress in picking up tree piles — but still have more than 70-percent of the city to do.

He says all the individual piles picked up from the curb each day add up to one big pile.
“To put it in perspective– if we’re moving 35,000 yards of debris a day if take a regular football field back of endzone to back of endzone, sideline to sideline — we are covering that football field between 15 to 20 feet deep every day,” Kampman says.

Kampman says they used snowplows early on to help push downed trees out of the streets, and now are using their winter snowplow plan to track tree pick up. He says the zones they are using are the same ones they use when tracking the progress of snow removal in the winter. “Those zones came in really helpful to keep us organized and to help us keep track of where we are at.”

The trucks take the trees to six different dump areas. “We wanted to open several different sites to try and minimize the distance that we are hauling this debris. So, the debris shows up on the site, we pile it as high as we safely can, and then we have large grinders that are grinding up the debris into mulch,” Kampman explains. “And those piles of mulch are sitting on the same sites right now and will be hauled off to wherever their final resting place may be.”

There are a variety of different types of trees that were blown down. Kampman says their main goal is to get them moved out of the neighborhoods. “We don’t really have the time to sort through the debris, cut firewood, look for good logs, that kind of thing. Residents and private property owners, we encourage them to go ahead and take any wood that they want to save at this point in time — because once it is on the curb it will most likely end up at one of our debris sites,” Kampman says.

He says the piles are a fire hazard and that is why the city is keeping a burn ban in place. Kampman says residents have been very patient and it is a big deal for them when the piles are finally removed.  “Definitely see a lot of smiling faces — a lot of people are happy to see those trucks in their neighborhood picking up the debris,” Kampman says. He says they expect to make a lot more progress in clearing out the tree debris in the coming days.

Kampman says they have also started sending out trucks to pick up the other debris created by the storm.

US, Wyoming Urge Rejection of Ruling That Blocked Grizzly Hunts