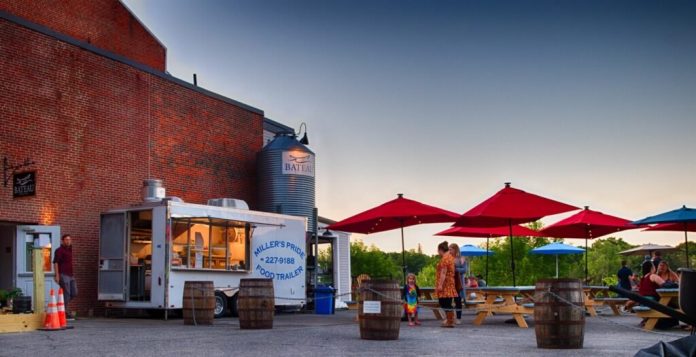 In any other year, the weekend before the annual Fourth of July holiday would be a crush of activity, with fairs, festivals and farmers markets as summer in Maine hits its stride.

Maine’s expanding fleet of food trucks have been following the lure of crowds, bringing with them their wide variety of offerings.

But in this year of social distancing, canceled events, and public health concerns over the possible spread of COVID-19, food truck operators in and around central Maine are having a very different season.

On Saturday, Kristy Alexander was enjoying a weekend off in the summer, something she and her family haven’t done in decades.

The Alexanders own the Richmond-based Ye Olde English Fish & Chips food truck, which keeps them on the road for days at a time in the summer.

“We’re used to being gone every week,” Alexander said Saturday. “We start in Fryeburg at the Home and Garden show in May and we end at the Fryeburg Fair in October. This is definitely totally different.”

With their fleet of vehicles  — food truck, campers and refrigerated truck — they might stop home once a week to stock up again before heading out again. This year, they are home far more often than they are on the road.

Just north of Richmond, William Miller spent his Saturday setting up for his now-regular gig in Gardiner at Bateau Brewing on Water Street every Wednesday through Sunday.

Miller spent much of his first year in business — he celebrated his first anniversary in April — going to different locations with his menu of regional American classics like Philly cheese steaks, shrimp po’boys and carne asada street tacos. But earlier this year, he agreed to be the primary food truck for the Gardner-based craft brewery.

“We have 10 picnic tables in the parking lot,” Miller said earlier last week. “Nobody’s allowed inside to drink. They can go through and grab their beer and come outside to the picnic tables. They’re having live bands every Thursday night.”

As president of the Monmouth Fair board of directors, Butterfield has been well aware of cancellations across the state as the Monmouth Fair’s June date puts it at the start of fair season in Maine.

“We did have a couple of private events last week,” Buttfield said. “You know, employee appreciation things for Hannaford and a company down in Westbrook. We still have some stuff going on, just not to the magnitude that we typically would have. It’s really the restriction on mass gatherings that kind of gets everything held up.”

Phil Butterfield applies cheese atop the meat on a plate of BBQ Nachos on Friday on the Smokin’ Phil’s Belly Bustin’ BBQ trailer in Monmouth. Joe Phelan/Kennebec Journal Buy this Photo

Normally, Smokin’ Phil’s books between 75 and 100 events a summer, including fairs and private events like family gatherings and weddings, but many of those have been canceled.

“I’m still kind of waiting on the beer festivals,” he said.

No decisions have been made yet about those fall events.

The food truck business, which has been taking hold in Maine in and around Portland, is a relatively big business nationwide.

By some estimates, the food truck business is a $1 billion industry, with greatest activity centering in cities like Los Angeles; Austin, Texas; Portland, Oregon; and Seattle.

Industry research firm IBISWorld, in research released in March 2019 noted that the industry as a whole had grown by nearly 7% in the previous five years, and was expected to continue its growth in the next five years, even in the face concerns about the global economy that existed before fears of COVID-19 shuttered economies around the world.

The National Food Truck Associate offers a glimpse of the industry outside of New England.

The group is built on regional associations that have developed across the country with the mission of sharing information and resources among its members and acting as point of contact for people who want to hire food trucks.

Matt Geller, chief executive officer of the National Food Truck Association and co-founder of the Southern California Mobile Food Vendors Association, said Maine has no regional association under the umbrella of his group.

But the elements of the business are universal.

When food trucks aren’t at events or fairs, Geller said, operators make money at business complexes, drawing workers outside for a midday break.

What’s popped up in the place of events is coordinated neighborhood events, where someone who runs a neighborhood Facebook page coordinates a food truck stop.

“The big thing now is, it’s Thursday night, you don’t want to cook,” he said, “and you know a food truck is coming to your neighborhood.”

Some people have been skittish about ordering food to be delivered. The advantage of a food truck meal is that one person is making the meal to order in the neighborhood.

“In that same vein, if you scheduled the pickup for 6:15, there are a few other people there, but you don’t get near each other, but you’re still like: ‘Hey, what’s up?’ And it’s not quite like an event.”

Across the county, food truck operators are trying to find new ways to reach customers now that office buildings are empty or mostly so as office workers are now working remotely and many summer events are canceled.

Alexander said she has events still on her calendar. She’ll be headed up to Presque Isle for a week and a half, and the truck makes a stop about once a month at the Windham Correctional Facility, where staff members and anyone who follows her food truck on Facebook can grab lunch. She’s also got bookings at the agricultural fairs that as of this week are still expected to take place, including the Skowhegan Fair.

But rather than go to customers, Alexander said her family has installed a concrete slab at the end of the driveway, where they park the truck to open up every other weekend for whoever stops by.

Butterfield said he’s getting calls and invitations to commit to spots through the summer, but he’s been reluctant to do it.

The hurdle is not the elevated public health requirements of stepped up sanitizing surfaces that people are coming into contact with, new cleaning protocols around credit and debit card use, or providing single servings of condiments and flatware.

“The market is very, very volatile when it comes to availability and pricing, so I’ve been a little reluctant,” he said.

If he finds out Sunday night that his Monday order isn’t coming, he has to reach out to other suppliers to see if he can get what he needs.

“Weddings and those types of things where they’re very reliant on you showing up and bringing what you committed to bring — it’s very stressful,” he said.

Butterfield operates a property maintenance business and a heating service business, so he and his wife, a veterinary technician, don’t rely solely on the barbecue business.

Miller, who lives with his family in Vienna, started his food truck after a career spent in the restaurant business across the United States and in Toronto. Most recently, he had been selling food for a major supplier and he could see a period of downsizing coming, so he was able to get his food truck started before he left that job.

He has been well aware of the cleaning requirements of national chain restaurants, and he’s able to put that knowledge to use now in his own business, with an added twist for social distancing.

“People can order straight from their table,” he said. “They can call or text me, and I’ll tell them how long their order takes and they can pick it up.”

All of the large and small changes to the business, brought about by the highly contagious coronavirus, are leaving their marks on the food truck business in central Maine.

“It’s been life-altering,” Alexander said. “Some people are not going to make it through this because of the line of food they have or they just don’t have the resources to go somewhere.”

With only about a third of their regular business booked, the Alexanders are instead spending family time this summer.

Alexander said she’s been able to build friendships and relationships over 21 years in business, which gives her a network of customers.

“You have a reputation where people want to help you out,” she said, “help you make it through this time.”