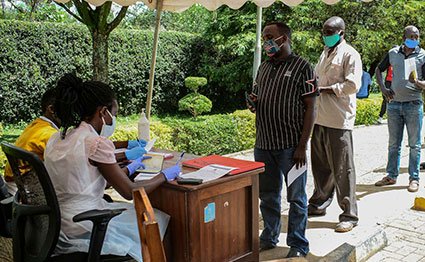 By ALLAN OLINGO
More by this Author

By NASIBO KABALE
More by this Author

Transporters who turned up at the Port of Mombasa on Thursday to pick cargo were thrown into confusion after they were denied access for not having a Covid-19 free certificate.

Port stakeholders have termed the requirement that all cargo crew be tested and issued with a certificate before being let into ports and through border points premature.

The move, announced on Wednesday by Transport Cabinet Secretary James Macharia, is likely to see clearance and transportation of essential goods delayed further.

“Right now, we are concentrating on truck drivers and their assistants. The certificate will expire in 14 days, then they will be required to take another test,” he said.

Transporters have questioned the capacity of the government to carry out the exercise, considering the Health ministry is conducting an average of 1,500 tests per day countrywide.

“The situation will get worse if the Ministry of Health will not come in to expedite the process. We need more personnel for this requirement to be effective since there are more than 1,000 trucks that leave with the transit cargo daily,” Kenya Transporters Association chief operating officer Mercy Ireri told the Nation.

The cost of the tests will be borne by the importers, who are expected to transfer the same to the consumers, adding to the cost of doing business.

Kenyan truck drivers have emerged as the weak link in the region’s efforts to fight the spread of the disease. This has been especially the case for Uganda, where over seven have tested positive with zero community infections.

Bungoma County, through which truck drivers pass through on their way to Malaba border in Busia, has record two Covid-19 cases, both being truck drivers.

The drivers are now bearing the brunt of the stringent measures put up by respective countries as they ferry cargo across the region.

The drivers have raised concerns over the poor treatment they are receiving at border points. Some say they have been given the moniker “corona”.

A number of them have also been held in isolation in foreign countries after testing positive for the disease, making experienced drivers shy away from the work.

Some transport companies are also beginning to shun the transit goods business, preferring local transport instead.

CS Macharia has said that said that the testing and certificate requirements are the new normal, not just for the truck drivers but also for other players in the logistics sector.

Others who are required to carry the certificates are travellers who had selected their quarantine facilities before arriving into the country from abroad, but this may be extended to many others as the country looks to reopen businesses.

“This certification could soon be required in other sectors such as hotel and restaurant industries, where employees are required to be tested before they can open. The certificate gives confidence to employers and it might be useful to have such in other sectors,” Mr Macharia said.

The requirement for a Covid-19 free certificate seems to be gaining popularity across different sectors across the world, as countries seek to resume business after weeks of inactivity.

Countries like Chile and Turkey have announced plans to introduce the certificate requirement as a way of easing lockdowns.

The World Health Organisation, however, says that the certificates could inspire false confidence and help spread the virus further, stating that there is “no evidence” that people who contract coronavirus are immune from re-infection.