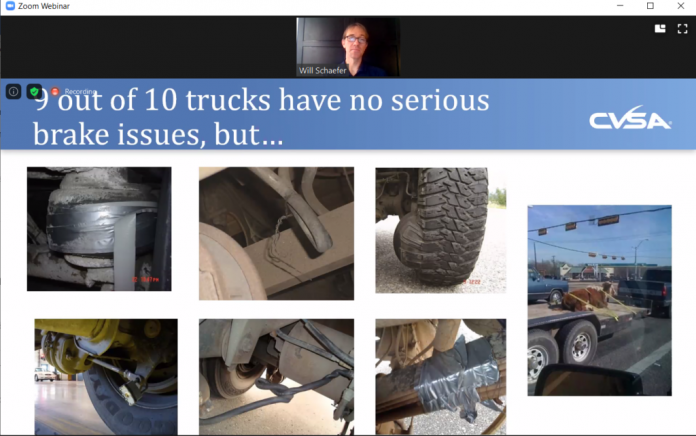 “Rear-end collisions can be your worst nightmare, or a plaintiff attorney’s dream come true,” Mark Rhea, an independent transportation professional, said during an Aug. 20 webinar by Infinit-I Workforce Solutions. He noted 12% of verdicts involving commercial vehicle rear-end collisions award more than US$1 million in damages. “So, to put it simply, brakes are important.”

Most inspections during the campaign will be of the Level 1 variety, with a special focus on brakes. In 14 jurisdictions, including Alberta, roller dynamometers may be used for performance-based brake testing.

Inspectors have been equipped with sheets depicting various levels of hose wear, and which should place a truck out of service. But the good news, according to Rhea, is that it’s an easy, inexpensive fix and easy to spot ahead of Brake Safety Week.

“It’s usually caused by dangling on the deck plate and the movement of air hoses over the deck plate,” Rhea said. “It’s very easy to find and fix.”

Will Schaefer, director of safety programs with the CVSA, agreed, adding hoses rubbing together is another common cause. Last year was the first that CVSA looked specifically at brake hose chaffing, so it has limited data on the issue. However, of 34,000 inspections conducted during 2019 Brake Safety Week, there were 2,700 chaffing rubber hose violations, and 1,700 for having kinked thermoplastic hoses.

Schaefer encouraged fleets to prepare for Brake Safety Week by ensuring their air brake systems are in good condition. The campaign is about awareness, after all, and not meant to be strictly punitive.

“Companies plan to get ready for these events that we conduct a few times a year and in doing that, they’re checking their vehicles. That, in and of itself, is picking up the level of maintenance on vehicles and reducing the likelihood of violations, rear-end crashes or runaway trucks,” he said.

In some cases, he added, drivers appreciate when an unnoticed defect is discovered by an enforcement officer.

“Drivers are appreciative when they find out a brake drum has been damaged or a brake lining has gotten oil-soaked,” Schaefer said.

In recent years, about 20% of vehicles undergoing a Level 1 inspection have been placed out of service, and half of those were due to brake-related issues, according to Schaefer.

Demand for Truck Weighbridges Skyrockets with the Surge in Covid-19 Cases,...