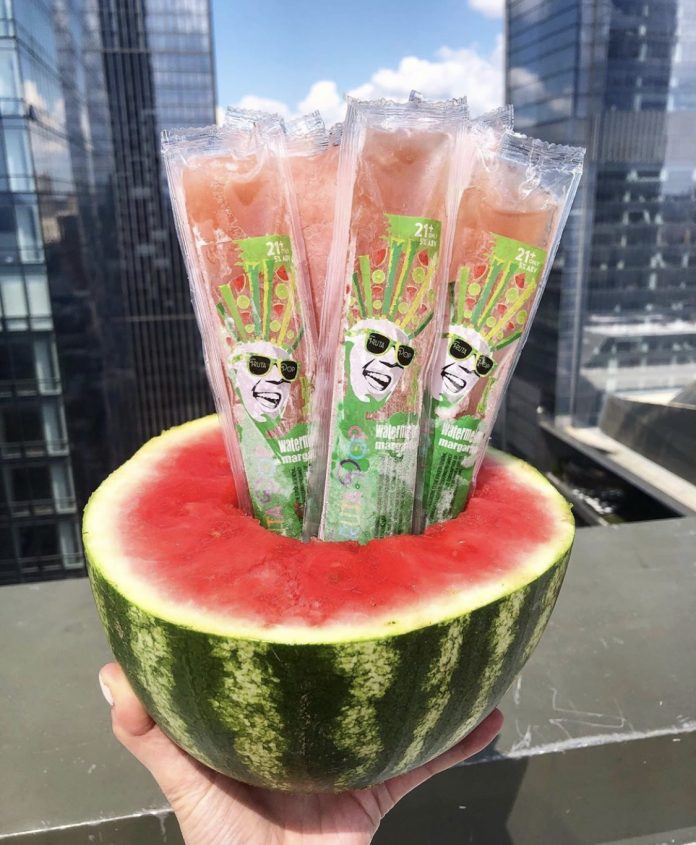 Laurance Rassin and Tracy Memoli struck icy gold when they launched their boozy concoction FrutaPop to much acclaim in 2017, garnering national coverage in outlets ranging from Forbes to Cosmopolitan and sales all over the country. But in a world where a grocer’s freezer is exclusive real estate, and a large subset of their retailer clientele doesn’t even have freezer space – liquor stores – they knew reformulating to a shelf stable product would be a boon.

So they’ve done it, and they’ve invited competition to join them.

TopPop has been manufacturing and packaging FrutaPops since opening its first production line two months ago, alongside similar products from six big-name booze companies and private labels that wanted in on the summery treat. They’re not at liberty to share exactly who else they’re producing for, but they’re brand extensions—akin to Jack Daniel’s recently released canned cocktails or its well-loved barbecue sauce—and by fall, Martin said, we’ll all know who they’re talking about: products will be in 5,000 big box, liquor, and grocery stores nationwide.

In the move from the frozen section to shelf stable, the list of things Rassin won’t miss is short but cost-saving: “Dry ice, polar boxes, frozen trucks, products melting. All kinds of anguish,” he said, calling the frozen distribution chain “a whole logistical nightmare.”

“If a frozen product leaves the factory as a frozen product, it must be loaded onto a frozen truck. What happens if the freon is out of the trailer? Or if it doesn’t get right in the freezer at the store, you lose product. This is the ideal frozen product – if it’s outside and it’s thawed, you can refreeze it. If it was on a stick, you’d lose your money,” Rassin said.

While the end user experience is the same – after consumers put it in their own freezer, of course – shelf stable FrutaPops and similar products are cheaper for TopPop to ship and cheaper for retailers to keep. The product currently runs $60 for a pack of 12 alco-pops, but expect prices to go down when the shelf-stable option hits shelves later this summer.

Boozy popsicles fit well in the current moment, Rassin explained, as millennials are trending toward low-proof beverages. Bon Appetit estimated in 2018 that low- and no-alcohol beverages will grow by about 32 percent through 2022 in the U.S. market, boding well for TopPop’s unreleased slate of items that range from 3 percent ABV to 8 percent ABV.

In the post-COVID-19 world, they fit right in, as Rassin predicts the increasing use of single-serving items will extend to boozy treats.

After producing FrutaPops in Pennsylvania for three years, Rassin and Memoli didn’t hesitate for a moment when Martin suggested TopPop be located in New Jersey. Martin has 40 years of manufacturing and packaging experience, with half of that in food packaging, and has packaged all over the mid-Atlantic. “Pennsylvania is state-controlled liquor, so from a manufacturing standpoint and a retail standpoint, it’s a different dynamic [than New Jersey]. Not that it can’t be done, but it can be troublesome,” Martin explained. “Every state has its own share of laws and rules that you have to deal with. I knew what I was getting into [with New Jersey] so it’s kind of like ‘go with the problems that you know, not that you don’t know.’”

They all have their specialties: Memoli, the consummate foodie, has been a judge at international dessert shows; artist Rassin specializes in branding and design; and Martin is a manufacturer.

TopPop secured three separate permits to produce with wine, spirits, and malt at the Food and Drug Administration-regulated facility, which also falls under the purview of the U.S. Alcohol and Tobacco Tax and Trade Bureau. Depending on client needs, TopPop can take in products that have been produced and blended elsewhere for packaging only, or they can turn a concept and some capital into another brand’s masterpiece—the latter will take 10 weeks, and the former, just eight, Martin said.

“We’re able to act quickly and turn this around in a turnkey manner,” Rassin said. “The focus is on the clients and trying to achieve their goals.”

Based on current orders, TopPop is slated to rake in $7 million to $10 million in its first year, and $15 million to $20 million the following year. With 20 full-time employees and 30 temporary workers and current manufacturing lines, production capacity will be 50 million boozy popsicles by July. Now that’s cool.