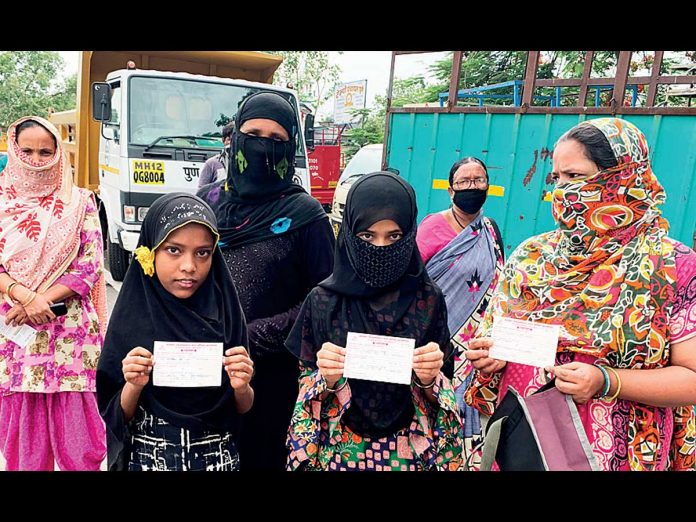 After making much ado about adopting the Bhilwara model to clampdown on containment zones, (PMC) seems to have lost the plot in execution. While the model called for supplying essentials to the doorstep of the residents in the targeted areas so that people do not step out of their homes, PMC distributed coupons that required residents to queue up for their provisions when its truck came calling with the kits. Result — thousands converging at a place to collect, defeating the very purpose of the exercise.

For Rizwana Mansuri, a resident of a slum pocket behind Juna Bazaar in , it has been an intense struggle for survival in the past month, with a family of seven to feed. The fact that her husband, the main breadwinner of the family, has gotten stuck in his native village due to the lockdown has not helped her situation.Her own income from making utensil scrubbers is too paltry to support the family. So, when she received a coupon for the ration distribution from PMC, it was a muchneeded relief.

However, on the designated date — May 15 — Mansuri found herself in the midst of a chaotic crowd clamouring for the ration, when the PMC truck came outside her basti. “I stood in the queue for over an hour in the scorching sun. But the crowd was out of control and social distancing was not part of the scene. Yet, after all the wait and struggle I returned home empty-handed,” she told Mirror.

The problem was created by people who did not possess any coupon and also residents from neighbouring slums such as Kamgar Putala Vasti and Rajiv Gandhi Nagar joining in. This completely threw the process of distribution out of gear, leaving legitimate coupon holders out in the cold. “According to the coupon I was given, I was to receive my kit on Thursday. But after standing in the queue I failed to procure my provision so I returned on Friday, but the one hour spent again wasted,” explained Ruksana Shaikh, another resident of the same slum in Mangalwar Peth.

Thousands converged at the PMC ration distribution location in Mangalwar Peth on Friday, as shops in their area are shut and they have no other option left; reportedly, people from neighbouring slums also gathered at the spot

In effect, what PMC is achieving in its implementation is a contradiction to what it set out to do. The door delivery under the Bhilwara model, closing all shops vending essential commodities in the area, was aimed to keep people indoors and curb the spread of the virus.

Acknowledging the complete mayhem being witnessed by the process instead, the PMC commissioner Shekhar Gaikwad blamed it squarely on the unsolicited intervention of corporators. “We initially tried door delivering the kits. But the people started crowding in wherever the delivery was being made. So we hit on the idea to issue coupons to contain the number of people coming for the kits. However, the local corporators got into the scene, throwing things out of our control. They’ve taken over and are doing the distribution themselves. This has led to the pandemonium we are witnessing. We’ve now instructed our ward officers to stop distribution if such crowds gather.”

Carroll County woman dies after being pinned under her pickup truck