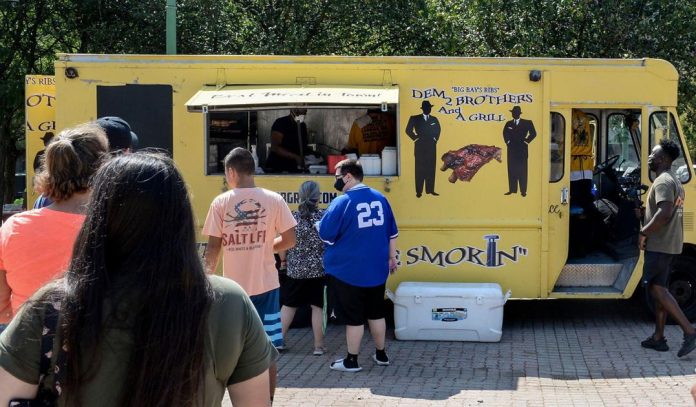 Pieces of a billion-dollar business parked in a loose semicircle Wednesday at Slack Plaza in downtown Charleston.

But on a postcard-worthy afternoon, most people visiting the city’s first Food Truck Wednesday were more focused on sauces and condiments than on dollars and cents.

After all, the world remains in the grip of a global pandemic that continues to deal body blows to our society. With that comes natural health concerns associated with COVID-19 and the need for constant reassurances that proper safety measures are in place.

That’s especially true for a food-and-beverage industry that’s had to reinvent itself on the fly while answering a two-part riddle: How do you keep business flowing while also providing a safe environment?

“We all know our economy and local businesses have suffered because of COVID-19,” Charleston Mayor Amy Shuler Goodwin said. “This is a unique, innovative way that we could shine a light on some of our local folks while making sure people are in an outdoor setting and have room to properly social distance.”

The initial event was the first of four planned on Wednesdays this month, with each starting at 11:30 a.m. and ending at 6:30 p.m.

Hand-sanitizing stations were placed around Slack Plaza for patrons. Spaces were measured out to maintain distance between the food trucks so visitors could maintain proper spacing while waiting on their food.

“This is nice,” said Beth Sammons, who was waiting on an order from Joey’s Rockin’ Dogs and Tacos. “It’s good to be able to get out and not have to worry. This is great.”

A 52-year-old Dunbar resident, Sammons said she was downtown to take care of some business when she noticed the food trucks. She said she didn’t have a lot of time for lunch, but it was hard to pass up because of the aromas wafting from Slack Plaza. She also was curious about the steady stream of people snaking through the square.

Make no mistake about it: The food truck business is getting attention.

According to the U.S. Census Bureau, sales from food trucks increased 79% between 2012 and 2017 — going from $660.5 million to more than $1.2 billion. And research firm IBISWorld says there were 25,476 food trucks in the United States going into this year, the result of 8.2% growth annually since 2015. The industry was expected to match that projection in 2020, although analysts say it could shift drastically in either direction because of the pandemic.

It’s an industry that’s gaining traction in the Kanawha Valley, as the City Collector’s Office says there are 41 food trucks registered in Charleston.

“Food trucks are becoming more prevalent in our region, and Slack Plaza gives us a great place to highlight them” Jane Bostic, special assistant to the mayor, said. “When Mayor Goodwin had this idea, our team started reaching out to food trucks to gauge their level of interest in the project. They were overwhelmingly for it and wanted to give it a try. Next week, we hope to have additional food trucks to bring even more people downtown.”

That’s been the hope for Joey Simonton, owner of Joey’s Rockin’ Dogs and Tacos. A food truck operator for 20 years, the 55-year-old went through his entire on-site inventory Wednesday, selling more than 100 tacos and 30 hot dogs. Simonton said he would have planned for more product, but it was hard to nail down a solid prediction of what he would sell.

“Man, it was a good day,” Simonton said. “I wasn’t really sure [how much to stock]. I knew what we needed and what the average numbers were when we go to one of our regular stops. With this being the first Food Truck Wednesday, and still limited people working downtown, I was really not expecting to do as much business as we did. So, I was pleasantly surprised. It seemed everyone there did pretty well. It was good, I think, for everybody.”

Those “regular stops” have kept his business afloat. Typically he will set up shop in at different spots daily, but will be at each location week to week. Simonton said he’ll normally announce the day’s plans on Facebook during the morning as a way to drum up business, but it’s also to keep from “stepping on the toes” of other food truck operators.

He said that, sometimes, competing food trucks will sort of partner up and share a location as a way to offer variety and create a bigger buzz around that spot. Still, it can only go so far when it comes to replacing the primary lifeblood of the food truck industry — that being fairs and festivals, which have been shuttered by COVID-19.

“Having this little get-together,” Simonton said, “was a welcome change of our day-to-day struggles of trying to make up that lost income.”