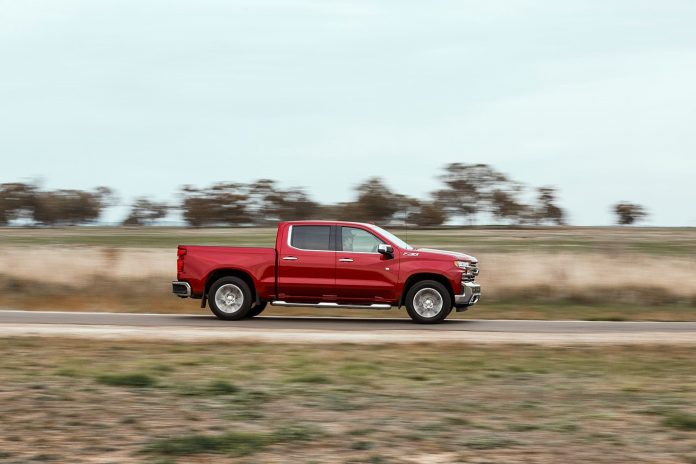 The Grand Ridge Road would be fantastic in a Fiesta ST or an MX-5. Unfortunately, I’m in a 2.6-tonne Chevrolet Silverado 1500 and the experience is vaguely terrifying. The narrow road’s edge disappears down a vertiginous slope into the treetops way below, my passenger peering down on the unprotected verge. This is beginning to seem like a very bad idea.

We recently opened invitations from readers to name some of the best roads in Australia and the Grand Ridge Road cropped up. It sounded intriguing, a 48km scenic trip through Victoria’s Strzelecki Ranges that mixed twists, turns, bitumen and gravel. Perhaps the clue that I could be biting off more than I could chew came with the reader recommendation that a Toyota 86 might be the perfect car for the job.

So here I am, a great-big 6.2-litre petrol V8 powering a 2063mm wide slab of chromium at oncoming road users. They are, if anything, more terrified than I am, probably because the chrome plating is also dazzling them with their own headlights. I reassure myself that I’m going to come off best should I hit something, only to be almost wiped out by an oncoming logging truck. That was karmic.

Make no mistake, the Grand Ridge Road is great, but just not in a Silverado. I drop down into the Morwell Valley, looking for roads that are wide enough for the big Chevy, a vehicle broad enough to make a Lamborghini Aventador seem svelte by comparison. It’s been a steep learning curve, that’s for sure. I still have no clue what many of the towing-specific controls do, this vehicle being supplied to us by HSV without a handbook for reference. The weird thing on the centre console that you squeeze together between forefinger and thumb is, the display tells me, the trailer braking control, but other than that I’m in the dark.

Earlier in the day, I’d driven into a fairly deserted car park at Coles and had parked the Silverado in the most comically inept way possible. The problem is a lack of steering lock compounded by the fact that the bonnet is so high that you can’t see the lines delineating the parking spaces. The upshot of it was that as I returned to the Chev, it looked as if it had been parked by a drunk, lumped across two bays. I’d already had to reject two supermarkets because I couldn’t see the Silverado getting into any of the slots in their underground car parks or even negotiating the ticket barrier.

Read next: New Ram 1500 due in Australia next year

You do gradually become accustomed to the size of the vehicle though. Yes, some may scoff that the Silverado 1500 is the baby of the family, and they’d have every right. There are bigger models on offer, but this is still a monster by the standards of usual dual-cab utes. We had an Amarok 580 Ultimate along for reference and it looked like a toy. The bonnet height of the Silverado was around my chest and I’m 6’3″. I could check the gutters on my house by standing in the tray. You’re a long way up.

According to my tape measure, the bed is 178cm long and 181cm wide, reducing to 128cm between the wheelarch tubs. A particularly nice touch are the cutouts in the corners of the rear bumper which act as steps for you to climb up. There’s an electric tailgate, lights in the fully lined tray and the 1500 also boasts a 4.5-tonne towing rating. 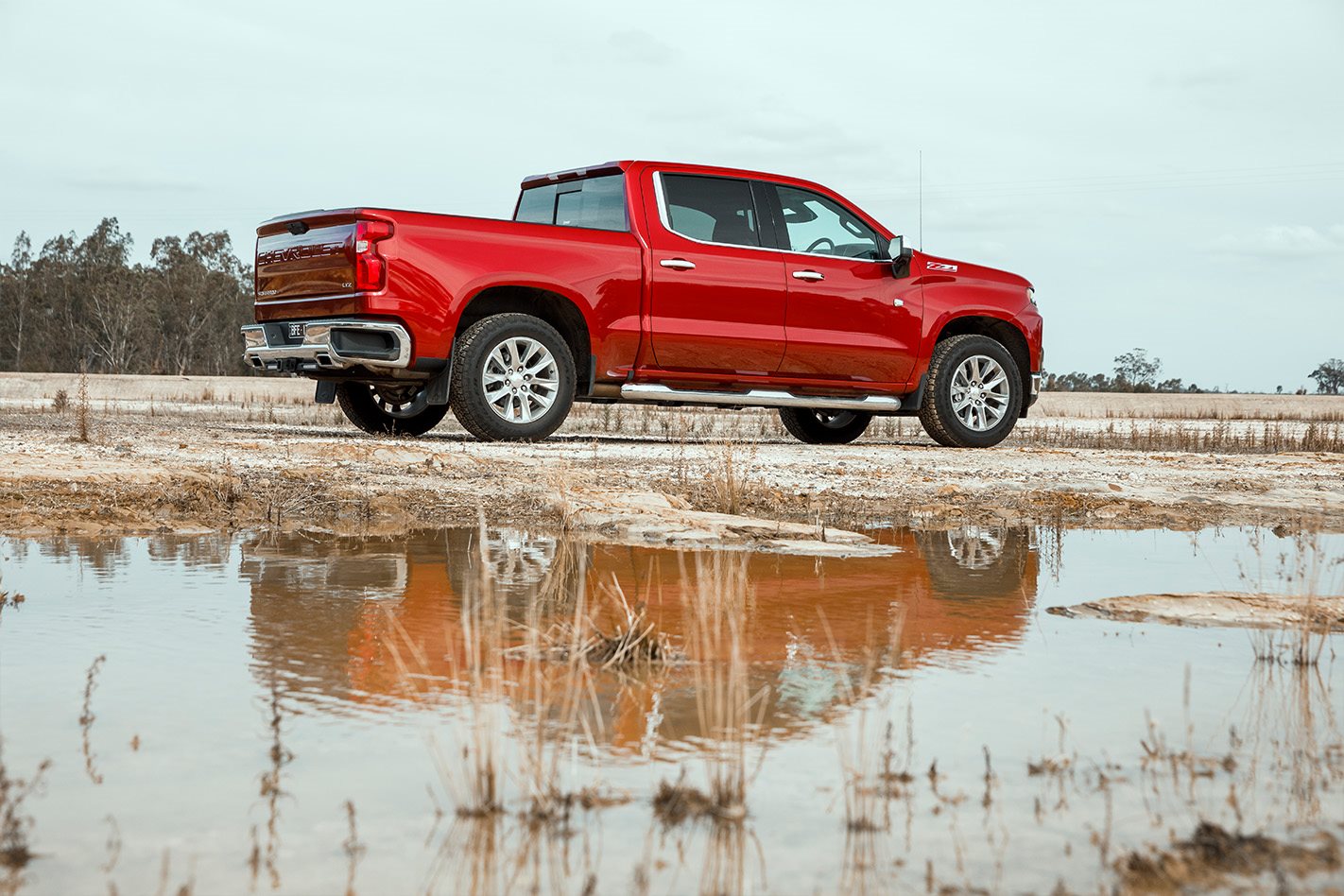 Jump inside and there’s stacks of gear included, including both USB and USB-C connections front and rear, a wireless charging pad, a powerful Bose stereo and one of the coolest heated seats around, whereby you can choose to individually heat the cushion or the squab. Yes, some of the details are clunky, like the ludicrously huge plastic wand for pulling the Silverado into gear. This usually flies straight through the detent for Drive and into Low Range, which can be embarrassing. Alternatively, it can catch halfway on the detent, so you have Drive but as soon as you hit a bump, it drops into the slot with a loud sproing. One thing that needs to be mentioned is the quality of HSV’s right-hand drive re-engineering. It’s truly excellent.

The rear seats offer limo-like legroom, thanks to a wheelbase of 3744mm. That’s longer than a Rolls-Royce Phantom or a Maybach 57, so it’s hardly surprising that there’s room to stretch out. There’s also stacks of stowage space under the rear seats and the cushions can flip up vertically to offer a huge aperture for bulky gear that you’d rather keep locked in the cabin. If you’re really keen on secreting things out of sight, there’s even a hidden storage compartment that you reveal by popping the centre section of the rear seat squab out.

Read next: How American pick-ups are set to save Australian manufacturing jobs

The more time I spent with the Silverado, the more I got used to the width and the fact that your front seat passenger is in a different zip code. You begin to relish the fact that it’ll accelerate to 100km/h in 6.4 seconds, making it the quickest all-wheel drive pick-up we’ve ever tested. On the strip, it was particularly strong at the top end, dispatching 100km/h to 180km/h in just 10.9 seconds. By way of comparison, the punchiest available dual-cab, the Amarok 580, covered the same increment in 18.8 seconds.

Build confidence in the light steering and the way the Silverado pitches and roll and it’s possible to hustle it along a good deal quicker than you’d even countenanced when you first made its acquaintance. I even managed to get it through a McDonalds drive-thru lane without lumbering over the kerbs. That still doesn’t mean it’s a vehicle that feels happy on a challenging road though. 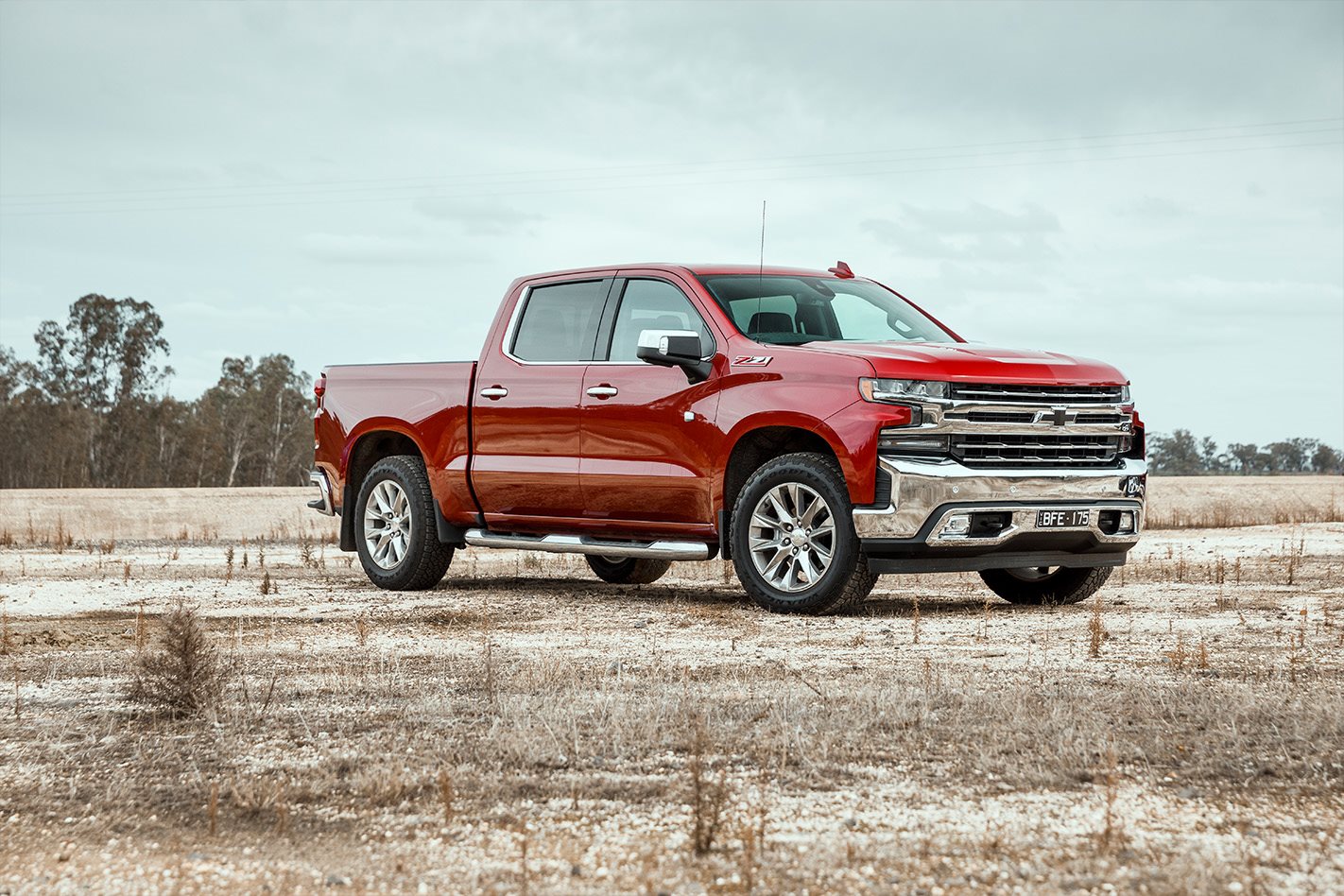 The front and the rear don’t always communicate in perfect synchronisation along a bumpy road, and it feels as if there’s a point of chassis torsion somewhere around where the rear passengers’ feet would nominally be. With speed, it can get quite lively as the front suspension toes out under bump. This is usual in pickups as the weight distribution of the vehicle is ‘off’ when it’s unladen. In effect, the lateral forces generated in a corner by the front tyre (imagining a nominal 66:33 front to rear weight distribution) will be double those developed by the rear tyre. This had a correspondent relationship with front and rear slip angles, hence why most pick-ups feel nervous when cornering unladen and you gradually need to wind on more steering to compensate for understeer during steady state cornering. The Silverado also exhibits a nibbly secondary ride and a rather queasy primary floatiness. On the plus side, the noise pathways into the vehicle are extremely refined and the 10-speed transmission slurs beautifully between ratios.

Anyway, enough of the road-testery nonsense and back to the question we were considering at the start of the piece. Is it too big for Australian roads? Not for major ones. But if you’re using this anywhere slightly urban, it’s a pain. There’s never really any time where the Silverado feels enjoyable to drive per se, but its refinement, space and comfort means that it’d be a great thing for a long road trip on straight roads or for its primary role, towing big trailers.

Read next: Can the best dual-cab you can buy beat an American pick-up?

As long as you can keep it in its relatively narrow comfort zone, there’s a lot to commend the Silverado 1500, and for $114K, it offers a heck of a lot of vehicle for the money. The problems come when you expect it to be more versatile and do the sort of things that big SUVs tend to be able to take in their stride. That’s where its skill set suddenly unravels. You may well find vehicles like this gauche, but having sampled the Silverado 1500, I can certainly see its niche. I’d wish HSV all the best with it, but I’m guessing they won’t need it. They’ll sell every Silverado 1500 they can punt out the door at Clayton. If you do buy one, just do yourself a favour and give the Grand Ridge Road a miss. 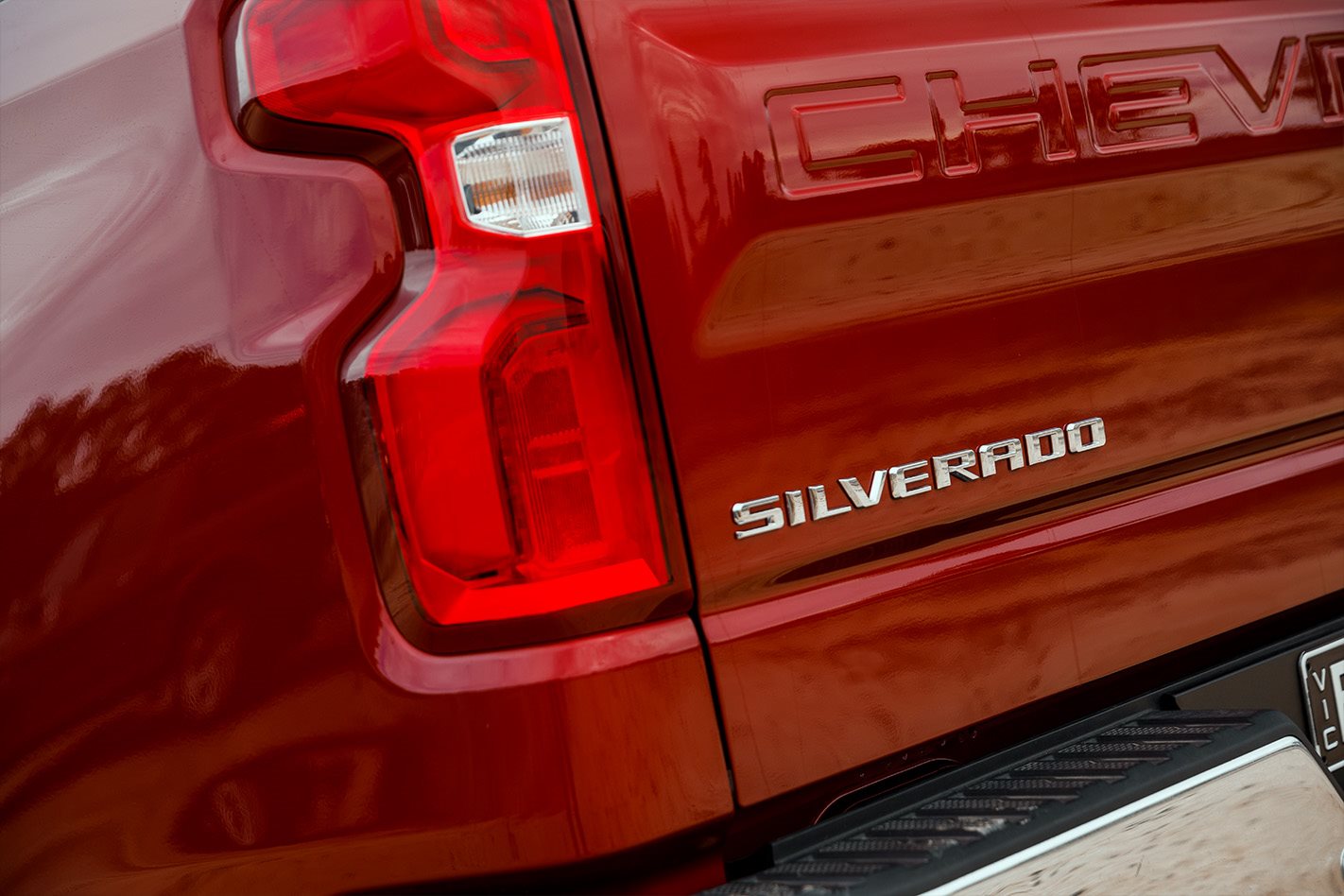 Authorities now considering whether charges are warranted against pickup driver who...