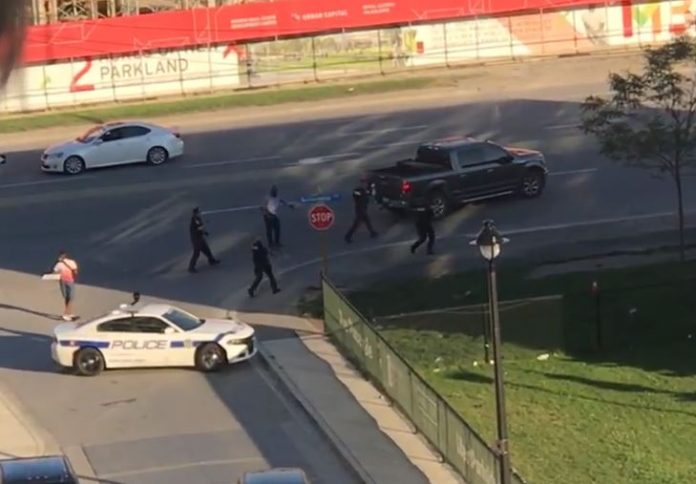 The hunt is on for a carjacker who threw a child out of a stolen pickup truck in Mississauga Friday evening.

Peel police Const. Akhil Mooken told media at the scene that officers were attempting to make an arrest near Burnamthorpe Rd. and Confederation Pkwy. near Square One at 7 p.m. when the suspects opened fire on police.

The officers reportedly returned fire in order to protect themselves, he said.

After ramming a police car with his own vehicle, one of the suspects then carjacked a pickup truck, pulling out the driver and three passengers before fleeing with an eight-year-old girl still inside.

Officers immediately pursued the truck, stopping after the suspect physically tossed the child from the vehicle.

She suffered no serious injuries, Mooken said, and was reunited with her family.

The vehicle was located a short time later near Eglinton Ave. and Creditview Rd.

Suspects fled the scene on foot, and the York Regional Police helicopter is assisting in the search for the culprits.

The action happened at a condo complex on Brickstone Mews, one street west of Confederation.

Video captured by resident Martin Eret captured the moments immediately after the carjacking — showing the truck’s shocked and frantic occupants, and the truck speeding away.

Eret told the Sun he was on his balcony when he suddenly heard three loud gunshots in quick succession from a parking garage entrance just below his unit.

“The truck stopped, pushed out 3 or 4 adults who were quickly surrounded by police, and left,” he said.

Eret’s video shows the truck’s distraught occupants being detained by police while the truck — closely pursued by police — sped west along Burnamthorpe.

One of the men begged officers to follow the truck, saying his daughter was still inside.

Two suspects were arrested at the scene, while two more remain at large.

One of the suspects appeared to have been taken away by paramedics, Eret said — while a second was captured on video being led away in handcuffs by police.

One of the outstanding suspects is described by police as a black male with a medium build, wearing an earring, a white tank top and white ankle socks with no shoes.

They’re both considered armed and dangerous.

Mooken told media that police have clear images of those involved, and urged them to turn themselves in.

Anybody with information is asked to call police or Crime Stoppers.

The Best Midsize Pickup Trucks to Buy in 2020 | Automotive