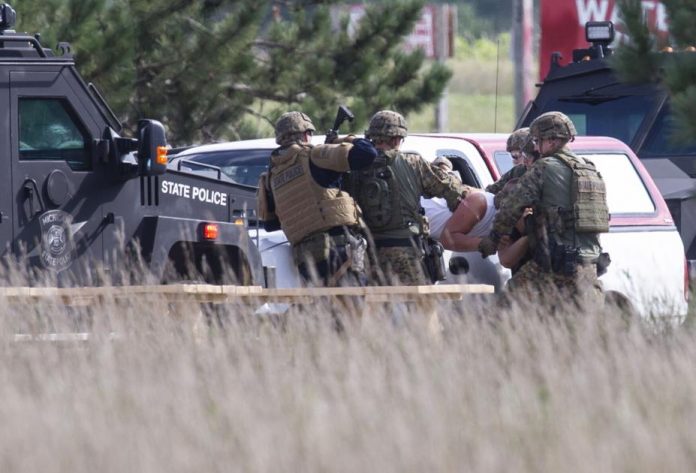 MANCELONA — A young girl with a crown of colorful flowers on her head peeked around the open back door of an ambulance — trying to catch a glimpse of a man sitting on the ground in handcuffs and surrounded by police — but the gloved hand of an emergency medical responder held her at a safe distance.

Medical professionals treated her and three other children Thursday afternoon in a church parking lot near Mancelona after a more than seven-hour standoff that followed a police chase that crossed three northern Michigan counties.

The stalemate ensued at about 9:30 a.m. just south of Mancelona between a man in a pickup truck and police. It ended just before 5 p.m. with the four children who also were inside the truck safe and the driver in custody.

Law enforcement officers in body armor rushed the man’s truck where it sat in the Antrim Church of Christ parking lot, tossing a stun grenade as two armored vehicles rammed and pinned the vehicle in the front and back. They pulled him out and wrestled him to the ground.

Police then carried the children from the vehicle to an ambulance where they were given water following hours held in the pickup truck on a cloudless day.

Breed said the motorist was behind the wheel of his parked truck and became agitated when Kimball reportedly tried to de-escalate the situation and get the man’s side of a “road rage” traffic complaint dispatchers received about him.

But the man put the keys in the ignition and tried to leave, so the officer told him he was being detained and reached for his keys, Breed said.

That’s when Kimball got a face full of piping hot coffee, his boss said.

Kimball suffered first-degree burns on his face and was released from McLaren Northern Michigan Hospital after treatment, Breed said. He’s expected to fully recover and return to work after the weekend.

A backup police cruiser was just arriving as the driver sped away, and the second officer then spotted at least one child in the vehicle, Breed said.

“So we then started pursuing,” he said.

Petoskey officers continued the chase south along U.S. 131 from Emmet County into Charlevoix County, but then broke off once speeds exceeded 70 mph and Michigan State Police troopers attempted to stop the truck, Breed said.

Witness Bobby Underwood posted cellphone video on social media of the pickup speeding off after police stopped the pickup truck in Antrim County, just north of Mancelona. The driver revved his engine to force a police vehicle out of the way after officers broke the man’s windows and popped at least one tire.

A small crowd gathered within sight of the Mancelona church parking lot, and three church leaders stood in a circle at the corner of Elder Road and U.S. 131, holding each other’s hands, heads bowed in prayer.

“Fast is one thing, but a safe end to this is what’s most important,” said the Rev. Andrew Apps, the church’s youth pastor.

The Rev. Mark McCool and his wife Robin had joined Apps at a roadblock on U.S. 131 to watch and wait for the situation to be resolved.

“There’s no reason for anyone to get hurt out of this,” Apps said.

The church members agreed perhaps the man was meant to come to a stop at their church.

“A lot of prayers have been said there. I hope it protects those children,” Robin McCool said.

Troopers and deputies attempted to speak to the man, and at one point weren’t sure whether he was armed. Witnesses reported police used loud sirens and a megaphone to encourage the man to answer his phone and speak with a negotiator.

“Our officers are trying to get him to talk, but he’s calling (TV news stations) instead,” Carroll said.

Some in the crowd watching the scene from backyards along Otis Drive gasped and screamed when police in tactical gear rushed the truck and the flash grenade banged and sent up a column of smoke. They looked through binoculars and tried to take a headcount of the children.

A wave of relief swept across the crowd when several there said they could see all four children near an ambulance and sipping bottled water. The group cheered and clapped when officers stood the handcuffed man up and safely walked him to a nearby police vehicle.

The standoff, initially reported to be at a home, was next door to the well-known Mancelona Veterinary Hospital, where staff members locked the doors and sent home those who weren’t needed, said hospital office Manager Brittany Stotler. Those remaining struggled to decide what to do because there were animals there and if remaining employees left, they couldn’t get back.

The church leaders said because of the day’s events they canceled a wood-splitting and stacking event planned for Thursday evening at their church building which is heated through winter months with a wood-burning stove.

Police have not yet released the man’s name or details about charges they may seek following the incident.

This Columbia church’s pastor preaches from the back of a pick-up...