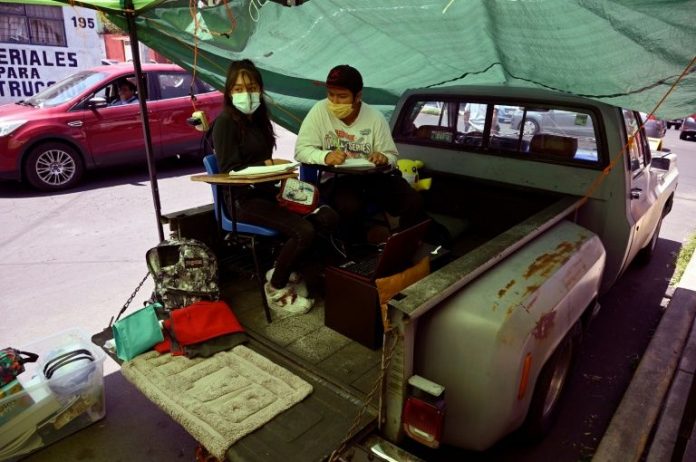 An improvised school in Mexico’s capital is helping underprivileged children keep studying during the pandemic with classes in the street, a blacksmith’s shop and even the back of an old truck.

The project is aimed at students struggling to keep up with a distance-learning program launched by the government for tens of millions of children whose schools have shut.

Each morning, after washing their hands, students in face masks squeeze into the back of a pick-up truck parked at the side of a street in Mexico City and sit at desks ready to learn.

“We’ve equipped it with television, internet, a laptop and a smartphone to help disadvantaged children to take their classes,” Dalia Davila, the 34-year-old manager of the project, told AFP.

Under a canopy to protect against the sun, a mother tried to connect an old cellphone to a Wi-Fi network to download teaching materials for her 11-year-old daughter.

A notice informs passers-by: “We ask you for respect, you are entering a study area.”

Schools have been closed since March in Mexico, which has recorded more than 66,000 coronavirus deaths — one of the world’s highest tolls.

Around 70 children between the ages of six and 15 have so far attended the “Little Corner of Hope” street school in a suburb of the capital.

The community effort relies on the support of several volunteer teachers, donations of electronic equipment, a blacksmith who allows the use of a workshop and a tortilla shop that provides a free internet connection.

“The most difficult things are the weather, sometimes there’s a lot of sun, a lot of noise, and it’s difficult to teach a language in the street,” said English teacher Eduardo Soto.

The 50-year-old offered his services for free after the pandemic left him without work.

Car horns and the noise of street traffic test the concentration of the students as they grapple with technological challenges.

“I didn’t even know how to insert a file,” she said.

For Davila and her partner, helping disadvantaged children is a way of coping with the death of their own young son, Leonardo, due to a heart condition.

“All this pain we transform into love, in sharing with those most in need,” she said.

On allegation of irregularities, locals snatch relief rice from truck in...