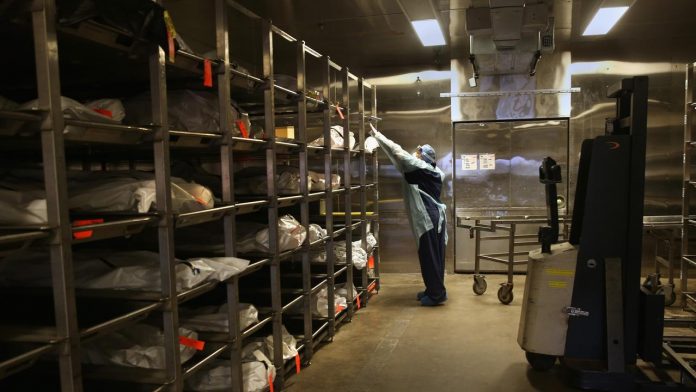 A chilling new phase has been reached in coronavirus-racked US states as morgues run out of space for bodies, forcing them to order in refrigeration trucks to cope with the overwhelming death toll.

Counties in Arizona and Texas have ordered in the so-called “mobile morgues” after accelerating rates of COVID-19 resulting in death overwhelmed some facilities.

Spectrum News in Texas reported “the grim reality that in some regions morgues are at capacity and cannot handle the number of dead”.

The morgue in Nueces County’s Corpus Christi, on the Gulf of Mexico 200km south of San Antonio, is already full.

Travis County, where the Texas capital of Austin is situated, is also in the process of acquiring refrigerated trucks in order to deal with the number of bodies.

Morgues in Texas’ Cameron and Hidalgo counties near the Mexican border now either have refrigerator trailers for the dead, or have ordered them, The Texas Tribune reported.

The morgue at Maricopa County, Arizona, which includes the capital Phoenix, was at 96 per cent capacity by last weekend.

County officials said in a statement they were working with the local Department of Emergency Management to “secure a contract for refrigerator trucks.”

The city’s largest hospital network, Abrazos Health, has also ordered “refrigerated storage”, even though it currently has “adequate morgue space”, according to officials.

Texas and Arizona are following the cities of Detroit and New York where the arrival of white semi-trailer morgue trucks lined up outside a number of hospitals back in March and April was a sobering sign of the death rates from COVID-19 early on in the pandemic.

Residents in Brooklyn were shocked to see workers using forklifts to load bodies into a refrigerated truck at Brooklyn Hospital Centre.

In April, New York City set up 45 new mobile morgues and local crematories were given permission to work around the clock.

This week, New York Governor Andrew Cuomo reported the coronavirus curve had been brought down, with 831 new daily cases across his state, and a total of 404,006.

Back when New York was the epicentre of the pandemic, it had a daily average of more than 10,000 new cases.

Originally published as Chilling new phase as US morgues fill up

So this is the situation in Brooklyn, New York: bodies now being stored in refrigeration trucks as #coronavirus deaths surge. Meanwhile, a day earlier in Mandeville, Saturday market was in swing and people hugged and greeted like it was business as usual, one official reported. pic.twitter.com/2SkH41TLuO

On a block in Brooklyn sits a refrigerated morgue truck. Marc Kozlow walks his dog, Hank, past it. He hears the refrigerator at night. He watches the bodies being loaded and unloaded. “Prepare for this,” he told ProPublica. https://t.co/v5N7v2zTFH

“A real bonus”: How Where The Truck is helping the food...