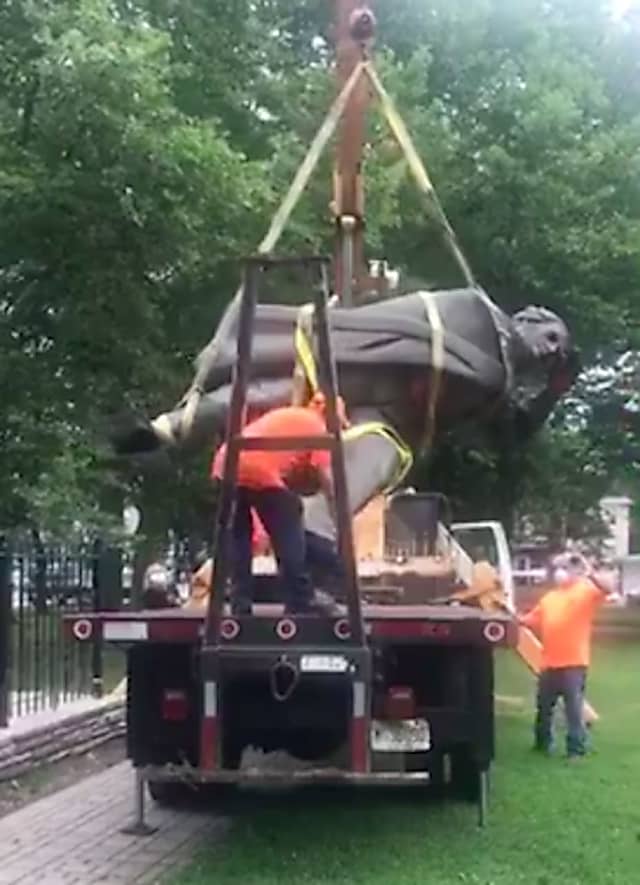 A 61-year-old statue of Christopher Columbus was removed from downtown Trenton on Wednesday morning by a city public works crew as pressure mounts nationwide to remove symbols of oppression.

The city statue of the explorer, located at the north end of Columbus Park on Hamilton Avenue, was removed from the Chambersburg neighborhood.

Christopher Columbus was a controversial figure and is not representative of the ideals the nation was founded on, Trenton Mayor Reed Gusciora said earlier. Gusciora said the statue will be placed in storage. The park will be renamed.

As the statue was hoisted off of its base and onto a flatbed truck about 8 a.m., arguments broke out among bystanders, as captured in videos by Peterson’s Breaking News of Trenton and The Trenton Post, among other news media outlets. No one was injured or arrested, police said.

Statues of Columbus in Camden and Newark also have been removed recently after criticism the explorer’s image recalls violence toward Native Americans. Other communities have taken down statues of slave owners and Confederate Civil War leaders.

The latest move to dismantle historic monuments was sparked by the May police killing of George Floyd in Minneapolis.

Statues of Columbus have come down in Newark and Camden, as other towns across New Jersey discuss removing homages to the Italian that some critics say left not a legacy of discovery, but one slavery, sexual abuse and violence toward indigenous people.