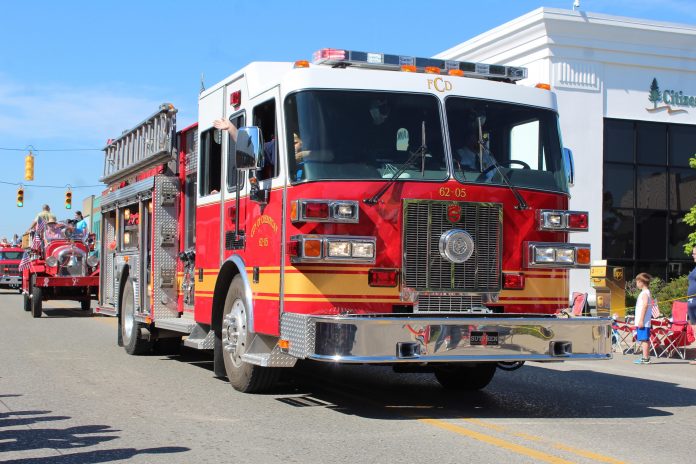 CHEBOYGAN — A public hearing was scheduled for the April 28 Cheboygan City Council meeting regarding the application for grant funding from the United States Department of Agriculture Rural Development to purchase a used fire pumper truck.

“This is a 2007 Sutphen Custom Pumper,” said Cheboygan Department of Public Safety Director Kurt Jones. “It is very similar to the one we bought a few years ago.”

Sutphen had contacted Jones about a year ago, when the company sold two new custom pumper fire trucks to the Petoskey Department of Public Safety. The company had taken in two used fire trucks in the trade from Petoskey and was asking whether the City of Cheboygan would be interested in purchasing one of the trucks.

Jones said the city was very close to having the grant and had tentative approval from USDA on the application.

The truck is a 2207 Sutphen Custom Pumper with a four-man cab. It has a little over 30,000 miles on it and is in very good condition. It will be purchased from the company for the total amount of $115,000. Of that cost, there will be $50,000 in grant funding and $65,000 that will be financed through Citizens National Bank.

City Councilwoman Sara Johnston said she had been in touch with Cheboygan City Fire Chief Don Dailey regarding the purchase of the fire truck prior to the April 14 meeting of the city council because she was not aware of the city’s need to purchase any equipment.

Dailey had told Johnston he was not aware of the grant application, nor that the city was looking to purchase the fire truck. She thought it was a major problem that the fire chief wasn’t included in the process of the purchase.

Jones said City Manager Tom Eustice had spoken briefly with Dailey regarding the fire truck, but they were holding off on telling him about the purchase of the truck until the public hearing was scheduled.

“I’m sure he will be very happy and elated with this vehicle, should we be able to purchase it,” said Jones.

Johnston felt it was best to table the matter until the fire chief was brought fully up to speed on the matter, but her motion to do so died for lack of support.

Mayor Pro Tem Nick Couture said he kind of agreed with Johnston on the matter. He felt it was OK for the city to schedule the public hearing for the grant application, and have some conversation with Dailey in the meantime.

The city council members voted to schedule the public hearing regarding the grant application for the April 28 meeting. Johnston voted against this.

Check out the Tribune next week to find out the results of the public hearing.

Updates on demonstrations Tuesday in Iowa

10 Toughest SUVs On The Streets (And 5 Trucks That Will...