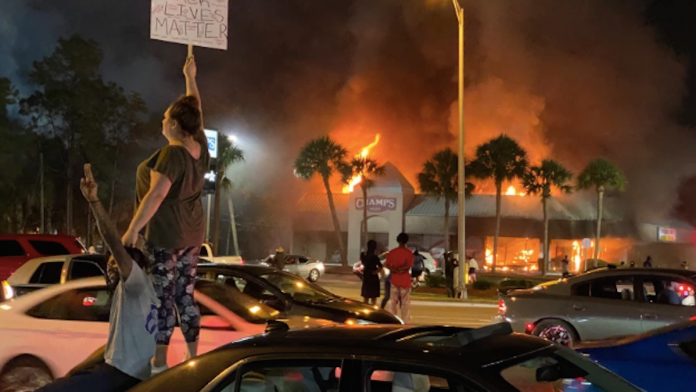 Deputies were recovering from injuries, nightly curfews were issued and the cleanup of smashed store windows began Sunday around Florida after a night of unrest throughout the state’s cities that followed protests in response to the death in Minneapolis of George Floyd, a black man who pleaded for air as a white police officer pressed a knee on his neck.

Jacksonville Sheriff Mike Williams said an unnamed deputy was either stabbed or slashed in the neck and was taken to a hospital for treatment Saturday evening. A sheriff’s office spokeswoman wouldn’t comment on the deputy’s condition Sunday morning.

“He was out here doing his job when he was attacked,” Williams said at a news conference Saturday night.

Williams blamed outsiders for the violence and said other deputies were injured from thrown rocks and bricks.

Police found the driver from the incident during a protest Saturday over the death of George Floyd.

In Tampa, protesters on Saturday night threw rocks at first responders and set fire to a sporting-clothes store at a shopping mall. A Hillsborough County Sheriff’s Office deputy was injured when he was struck by a firework and another deputy was sent to the hospital after being hit in the back of the head by a hard object, the sheriff’s office tweeted.

Images posted by the sheriff’s office showed shattered storefront glass at University Mall and the smashed back window of a squad car.

“We are better than this, Tampa Bay. Violence and looting is not the answer, and will not be tolerated,” Hillsborough County Sheriff Chad Chronister tweeted.

NBC 6’s Derrick Lewis has more from the scene where one police car was burned amid the conflicts between officers and protesters.

Nightly curfews were issued in Miami-Dade County, Florida’s most populous county, and Leon County, where a pickup truck drove through a crowd of protesters Saturday in Florida’s capital.

Protests on Saturday demanding justice for George Floyd took place throughout Florida and dozens of cities across the nation. Demonstrators outraged over Floyd’s death faced off against heavily armed officers in other states, with some smashing police cars, ransacking businesses and setting fires that smoldered through the night. A Minneapolis officer, who is seen on video pressing his knee on Floyd’s neck for several minutes as Floyd begged for air, was charged Friday in Floyd’s death.

In South Florida, after protesters hurled rocks and bottles at officers and set squad cars on fire outside Miami Police headquarters Saturday night, transit officials said that all Miami-Dade public transit was being suspended on Sunday, including buses and light rail. At one point Saturday night, Interstate 95 was shut down in both directions as a group of protesters stood on the busy roadway. Videos on social media showed dozens of people breaking into stores at Bayside Marketplace, a popular outdoor shopping center in downtown Miami.

Miami city workers on Sunday were seeing cleaning the streets of debris left from the protests.

Miami-Dade Mayor Carlos Gimenez issued a curfew Saturday night that will be in place daily from 10 p.m. to 6 a.m. Under the curfew, no one will be allowed on streets and sidewalks with the exception of police officers, firefighters, medical workers, utility workers and people walking their dogs.

“Let me be clear, justice must be done,” Gimenez said in a statement. “But rioting and looting accomplish nothing. Those unlawful actions just bring more pain and suffering.”

Tesla Is Not An Automotive Winner In The New Economic Environment...