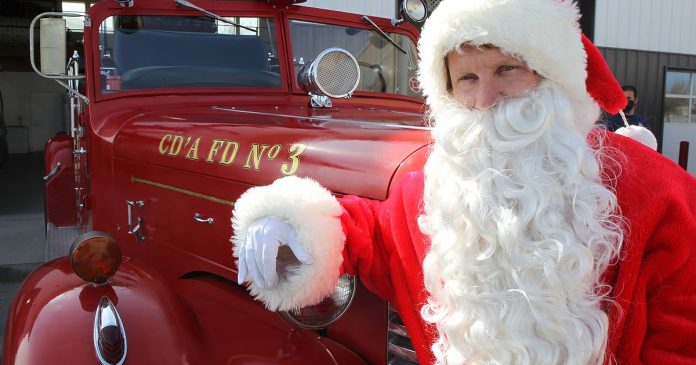 COEUR d’ALENE — Spring weather isn’t made for an elf with a beard and furred ruff.

But Scott Robinson, who played Santa Claus Tuesday for the kick off of the local firemen union’s food drive, didn’t sweat it.

At least not a lot.

His lean frame didn’t quite fill the Santa Claus suit, and his jaybird seat on the vintage 1947 Buffalo fire truck would afford a breeze and help him stay cool.

Not a difficult task for a smiling man in a winter coat in April sans an Old St. Nick paunch.

“Is it that noticeable?” Robinson asked before the red engine sputtered south from the Ramsey Road fire hall.

“We always do the mobile Santa food drive during the holidays,” Eckert said. “We figured with everyone staying at home, they may be kind of down, and top it off the food banks are out of food, or at least running low.”

So members of the firefighter’s union pitched in a $1,000 donation for the Panhandle Area Council, donned their breathable masks and at least one Santa Claus suit, fired up the Buffalo, and decided to head out to collect food for the food bank.

The food drive started Tuesday evening in the neighborhoods south of Appleway Avenue and west of Seventh Street. It will continue through Sunday and firefighters are asking donors to leave a bag or box of nonperishable food in front of residential homes, at the end of driveways or on sidewalks.

Firefighters will trundle past with music and sirens tooting, and snatch up the food.

The truck’s daily evening route can be tracked using a Santa tracker app that can be found on the Coeur d’Alene Firefighter’s Local 710 Facebook page. Today’s route will include neighborhoods south of Appleway Avenue and east of 7th Street. Collection will run from 4 to 8:30 p.m.

“If people get any good pictures of Santa and our fire engine, remember to tag us,” Eckert said.

The Buffalo engine was once, between 1947 and 1978, part of the Coeur d’Alene’s fire engine fleet.