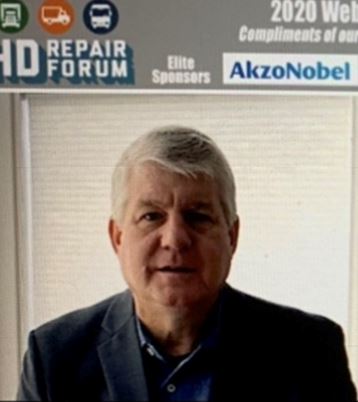 KATY, Texas – It has been a tough few month for the U.S. heavy-duty collision repair industry, and it is going to be a period of significant uncertainty for at least the remainder of this year, an expert warned Thursday.

John Webb, president of TenPoint Complete, a research firm serving the automotive and trucking industries, was speaking at a webinar orgainzed by the HD Repair Forum.

Sharing partial data from the first annual survey conducted for the Forum, Webb said 70% of respondents said their businesses were impacted by Covid-19, but they expressed the hope that they will get through it.

For 17%, it was business as usual while 1% of those surveyed said they are likely shut down permanently.

Webb said he was not surprised by the results.

“I think it doesn’t take a complete genius to figure out because of Covid, the social unrest the country is experiencing, and of course, it is an election year.”
He said 200 businesses participated in the survey.

Webb said the overall automotive market for the year is expected to be down about 12%.

“People are going to repair their vehicles more than they are going to look at replacing them in a time of uncertainty.”

Webb cited examples from the 2007-09 recession when, he said, annual parts volumes fell less than 2% while heavy-duty truck sales dropped by more than 40%.

Later in an email to Today’s Trucking, Webb said the biggest problem the U.S. industry is facing is the state of uncertainty the country is in now.

Six months ago, he said, he would probably have said hiring and retaining quality employees was the biggest challenge.

‘Next of kin have been notified:’ Two CN rail workers struck...