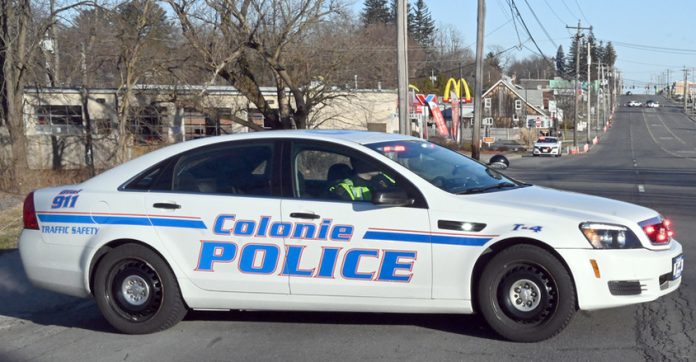 The incident also left police searching for the occupants of one of the vehicles, who fled into nearby woods on Morris Road, but not before one fired the shot at the second vehicle, police said.

No arrests had been made in connection with the incident as of late Thursday, the investigation was ongoing, police said.

The callers also reported that an occupant of the rolled over Jeep fired a shot from a handgun at a pickup truck, which had also been involved in the crash, police said.

Police soon found the pickup on Route 87 northbound, at Exit 4, and detained the lone occupant for questioning.

At the crash scene, officers found a spent shell casing near the rolled Jeep and observed inside the vehicle a large quantity of marijuana and cash, police said.

An ensuing search of the area that included K-9s from Colonie and the state police, as well as police from Guilderland and Niskayuna did not turn up the occupants.

Police only had vague descriptions of the suspects. Police believe they stole bicycles from a nearby neighborhood to flee the scene.

Police also found blood at several locations, leading police to believe that one or both were injured.

Police believe the incident started as a marijuana deal that led to the robbery and chase, the pickup truck chasing the Jeep. Then, after the crash, the occupant of the pickup truck tried to retrieve the stolen property and was fired upon by one of the Jeep’s occupants.

Morris Road was expected to remain closed in the area into the night as the investigation continued.

“This was an isolated event between the occupants of these two vehicles and there is no reason that the residents should be concerned,” police said in a release. “Our information is that the suspects are no longer in the area.”

Anyone with information on the incident is asked to contact Colonie police at 518-783-2744 or Capital Region CrimeStoppers.