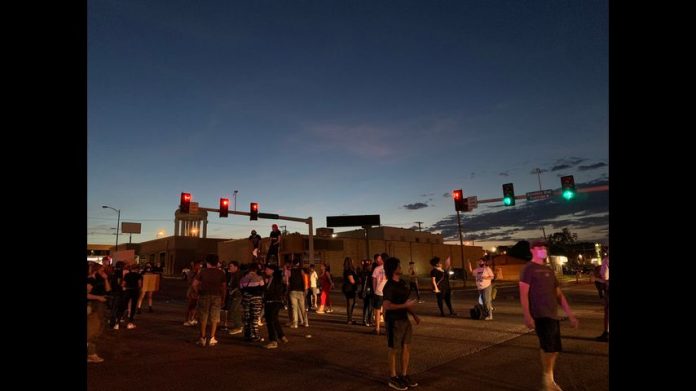 The group of about 100 to 150 people moved to different locations downtown from Broadway and Providence to outside the Columbia Police Department.

Protesters have blocked off the intersection of Broadway and Providence. At least 100 people here. Police just arrived. @KOMUnews pic.twitter.com/dhNtyFPiJ1

At one point, an ambulance, fire truck and multiple police officers responded to the protest. Witnesses at the scene told KOMU 8 someone had been hit by a car in an intersection.

BREAKING: Multiple police cars, a fire truck, and an ambulance have come to the protest at Providence and Broadway @KOMUnews pic.twitter.com/rIricPsr2d

KOMU 8 also learned businesses like Walmart and Lowe’s off of Conley Road have blocked the store entrances. Employees placed wooden pallets with stacks of mulch.

Walmart on Conley, and Lowe’s as well have both barricaded their doors. @KOMUnews pic.twitter.com/1LbVRop4hm

As of 10 p.m. Monday night, there were no protestors near those stores.