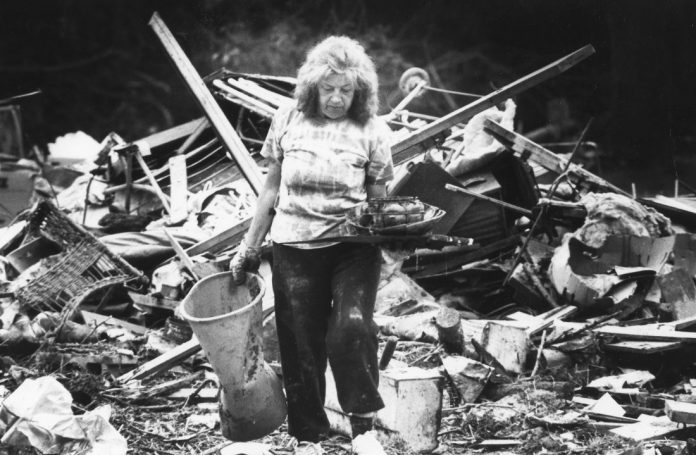 SHADYSIDE — Community leaders who were active during the tragic 1990 flood of Wegee Creek vividly remember the damage and loss of life, along with the outpouring of support in its wake.

Anita Wiley served as mayor during the flood.

“I had to call in the State of Emergency to Gov. (Richard) Celeste,” she said.

“It was a 10-foot water wall that night. It was just unbelievable horrific, because 26 lives were lost,” she said. “Most of the buildup was from mobile homes that were flushed off the side of the hill. They were thrown in the creek, and they stopped up…they created a dam and they blocked the water from flowing into the Ohio River.”

She had been out of town, serving as the director for Buckeye Girls State when she was notified by Jim Amato, then president of council, who coordinated with the first responders.

“He stepped up,” she said. “We got a fantastic police response.”

“He was better than any field general,” she said. “It looked like he was deploying troops like you would on a battlefield.”

When seeing the wreckage, Wiley said her first impression was that of a war zone.

“I saw it the next day. I flew home by helicopter,” she said. “When I first saw it from the air, it looked like someone had dropped hundreds of thousands of toothpicks boxes. … That was my first sight of it the next day.”

“The National Guard came in two days later. It was like trucks rolling in like you see in a movie, that’s how many National Guard trucks were coming into our community.

“He was really instrumental…Matt was too, he did a lot of work,” she said.

She recalled Warren driving a water buffalo truck daily to deliver water to those without service.

“I never saw a man work so diligently (as Warren),” she said.

“No one really knew what was going to happen,” Warren said. “I had known there was heavy rain predicted for the area.”

The night of the flood, he and Coffland took a chainsaw and Warren’s pickup truck and drove along Wegee Creek intending to help the township crew remove branches and limbs from the roadway.

“We were about two miles out Wegee Creek and we were stopped because the water was coming across the highway, and right in front of us was a car partially submerged in the water. That’s when we realized how bad the situation was.”

“We had a very powerful spotlight in the truck, and we rode along Wegee Creek honking our horn and shining that spotlight into peoples’ windows, trying to get their attention as to what was going on, at the same time ensuring we could get out of there as the waters continued to rise. There were several families who told us later they heard the horn and saw the spotlight and were able to react. We got out of there with just several minutes to spare,” he said.

When the fire department and first responders arrived, they began organizing what would become search-and-rescue efforts, but they still didn’t know how bad it was at the time.

“It was a night of hell, and when we woke up the next day it was just devastating, the damage that was done,” Coffland said.

Shadyside Mayor Robert Newhart had been a councilman at the time. He was out of town when he heard the news.

“I got up Friday morning and on national news it said Shadyside was off the map,” he said. “I hurried up and drove home from Myrtle Beach and the National Guard was on each end of town not letting people in unless you showed ID.

“It was just unbelievable, how rain could cause that much devastation. It threw cars around like they were matchboxes,” he said. “Nothing like it had ever happened in Shadyside. … I pray it never does again.”

Dwayne Pielech, who has since served as director of the county’s Department of Job and Family Services and currently director of Senior Services was not an official at the time of the flood, but was in the area during that he recalls stopping by that night while driving from Pittsburgh to Columbus.

“My wife’s grandparents lived on Wegee Road, and when the water started to come down Wegee they heard a noise and our grandfather was in the basement. He came upstairs and just as he went upstairs, the wall of water blew the side of the foundation open and literally two firemen carried grandpa and grandmother on their back to a waiting truck and drove off as the flood was coming down Wegee Road. It was a mess. That’s how I remember it.

“They just made it out in the nick of time or they would have been a statistic. They were in their 80s then when that happened and one of them was basically wheelchair-bound and they literally were saved by the local fire department.”

All were impressed by the tremendous outpouring of help.

Wiley said the Salvation Army had a quick response, and a supply pickup was established at Jefferson School. Bellaire Hospital donated tetanus shots and business owners donated cleaning supplies. All the area churches donated food and the Lincoln Avenue United Methodist Church opened its doors to people Impacted by the flood, as well as workers and the National Guard. One woman made dolls for the children.

“There was a lot of people who donated their time, money and experience,” she said. “The donations that came in semi truck after semi truck.”

“People came from everywhere to help clean up. There was church groups. There was individuals. They came from miles around to help out Mead Township. I could not thank them all, there were so many groups,” Coffland said.

Warren, Wiley and others set up a committee to distribute the donations. Wiley recalled they acted quickly and were able to provide some immediate relief, even if only a comparatively small amount. Warren recalls evaluating the residents’ needs and determining how much the committee could give.

“I’m very proud of the people in this community,” Warren said. “Long after FEMA and the National Guard had left the area there was a time when you kind of felt alone, but people continued to work.”

Even after three decades, the loss can still be felt by those who lived through the flood.

“It took years for people to recover. You can fix their house, but their personal belongings, I’m sure it took them years, and there has to be a big void,” Newhart said.

Newhart added a memorial had been scheduled during the annual Loop festival normally held at this time, but the coronavirus pandemic has meant rescheduling the festival to the end of August.

“It took many months to try to get things back to some kind of normalcy. To this day in some respects it’s not normal, especially to those who lost property and loved ones,” Warren said.

“Those thoughts and memories never go away, of the people we lost, the family members,” Coffland said. “Time heals but you never forget.”

Covid-19 recovery could be good for electric vehicles

Rusty Truck Brewing, stymied by COVID-19, giving away beer rather than...