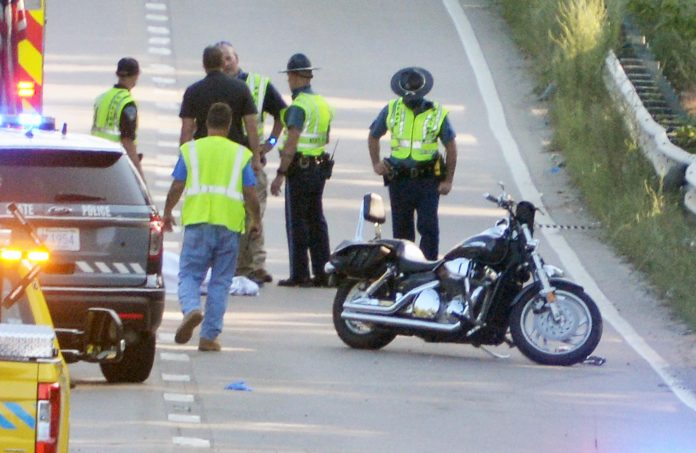 Mariusz Laszcak, 53, from Wilton, Connecticut, was killed when his 2006 Honda motorcycle collided with a semitrailer traveling southbound on Route 24 by the Exit 13A off ramp in Raynham.

RAYNHAM — A Connecticut motorcyclist was killed after a collision on Route 24 Friday afternoon.

State police responded to a crash involving a motorcycle and a truck on Route 24 southbound at the Exit 13A off ramp in Raynham at about 3:40 p.m. Friday.

We can deliver news just like this directly to your inbox. You can sign up for News Alerts (so you don’t miss anything important), our morning Daily Newsletter and more. It’s customized to your preferences — and it’ll only take a few seconds.

According to the preliminary investigation by state police, a 2006 Honda motorcycle, later identified by police as being operated by 53-year-old Mariusz Laszcak of Wilton, Connecticut, collided with a 2016 International semitrailer, driven by a 32-year-old man from Baltimore, Maryland, that was not towing a trailer at the time of the crash.

Laszcak was merging from Route 44 onto Route 24 southbound when he struck the rear passenger side tires of the truck, which was traveling southbound on Route 24, state police said.

Laszcak suffered serious injuries in the crash. While emergency responders performed life-saving efforts, he succumbed to his injuries at the scene of the crash, state police said. The operator of the truck was not injured.

State police were assisted on-scene by MassDOT and the Raynham Fire Department.

Staff writer Corlyn Voorhees can be reached at cvoorhees@enterprisenews.com. You can follow her on Twitter at @corlyn_ENT.