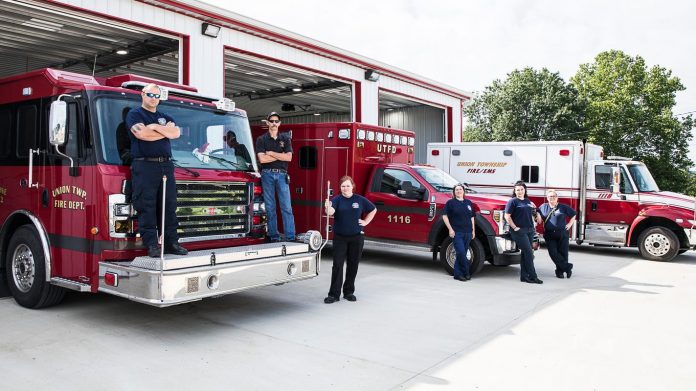 UNION TOWNSHIP- After about five months of work, the Union Township Fire Department has completed work on a new addition, adding three bays for trucks and ambulances to the station on Pleasant Valley Road.

The 64-foot by 48-foot addition cost $225,000, according to Township Trustee Jeff Henness. The project was paid for out of township funds, which were already set aside for the project.

The department is a mixed volunteer and paid unit, and takes more than 1,200 runs a year, according to Fire Chief Timothy Grimm. With 56 active members, the township has a crew on station 24 hours a day.

The new addition allows much more space for the expanding department to store vehicles and gear. The fire department has 11 vehicles total, including four ambulances, three engines, a grass truck, and a tanker, along with special operations equipment such as trailers.

“We had big trucks and little bays,” said the fire chief. “You couldn’t get around the front of the truck. You could only get around the back. You backed it in, you had to be just right. And you have people driving large trucks, it’s tough. So they created, really, lots of room to back in.”

Union Township is also growing in the past handful of years, requiring the department to change to keep up. The department currently covers a population of around 14,000.

“Time requires us to evolve,” said Grimm. “Fire apparatus and public need have outgrown a lot of our older building, so in order to accommodate our newer engines, the newer apparatus, we did this addition so we would have plenty of room to grow – the township is growing so we must follow suit.”

Henness emphasized how much the department has grown in the past two years. “We had maybe 12, maybe 15 max members, and now we have over 50. Back when they passed the fire levy, we had maybe two people on call, now we’re running four 24 hours a day with no new taxes.”

Grimm said that for the fire department, it was very important to be “good stewards” of the township’s taxpayer investment.

“As more people move into the area, taxpayer funding increases, but their rates stay the same. We’re doing everything in our power to make sure to be good stewards of the tax money and the taxpayer investment. We’re maximizing the investment of the taxpayers … by adding to this building we’re expanding where we need to and still staying within a reasonable budget.”

At a ceremony in March to celebrate the beginning of work on the firehouse, Sheriff George Lavender praised the project and the department for their ability to respond to calls quickly.

“The most important thing is getting folks out the door,” said Ross County Sheriff George Lavender. “It can’t be 45 minutes to an hour before we can get a crew on scene, that’s lives at stake. When we call Union Township, they acknowledge it and are out the door. When you have to get people to come in, assemble a crew, call for mutual aid, all of that is time-consuming.”

The Union Township Fire Department will hold an open house at the department, located at 12034 Pleasant Valley Road, from 8 a.m. to noon on Saturday to show off the new addition to the public.

Business not as usual in Kawartha Lakes after many stores reopen