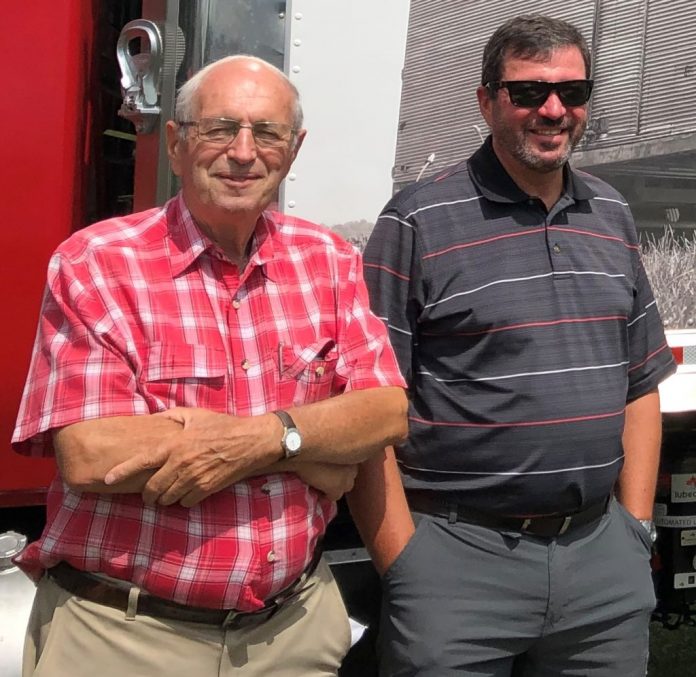 BADEN, Ont.
– Vernon Erb, who established the Erb Group of Companies with a single truck,
has been diagnosed with an aggressive form of leukemia – and his friends and
family are preparing a convoy of cars and trucks to say goodbye.

Beginning
at 2:30 p.m. on Friday, May 1, those who want to participate are being asked to
meet at the fleet’s Baden terminal to begin the convoy of appreciation.

“Unfortunately,
his cancer is extremely aggressive, and he will not be able to receive
chemotherapy treatments,” says Katie Erb, his granddaughter and an account manager
at the fleet. Given the bleak prognosis and visitor policies at hospitals
during Covid-19, he has chosen to return home for palliative care.

The company founder and recipient of the 2008 OTA-Trailmobile Service to Industry Award established the fleet with a single dump truck in 1959, after driving for Don Sindall Transport in New Hamburg, Ont. and marrying his wife, Viola. A feed truck and egg truck followed. And in 1965 he bought his first refrigerated truck – establishing the foundation for the fleet’s specialization in refrigerated goods.

Viola
served as his accountant, payroll administrator and office manager. And
together they built a business that spanned a continent.

Erb has also been recognized with honors including the 1993 Governor General’s Commemorative Medal, 2003 Colonel Robert Hardie Award of lifetime Achievement from the OTA, and a 2003 induction into the Waterloo County Hall of Fame.

Today the business has 1,500 employees and owner-operators, with terminals in Ontario, Quebec and Manitoba. The group also has a regional truckload carrier based in Pennsylvania.

“For those
in Erb-marked vehicles, we will spread them out among our personal vehicles,” Katie
Erb says, encouraging them to add “thank you” or “thinking of you” signs.

“Vernon Erb
is a great man,” she adds. “He has been a hardworking man and fostered the
values of family and community at Erb Transport. He has built this beautiful
legacy we are all a part of, bringing food to the tables of families.

“When
people see an Erb truck drive by, they know who we are, and it’s all because of
one man, his dump truck and his kind heart – a great man who always had time
for each and every employee and treated everyone with utmost respect and care.”