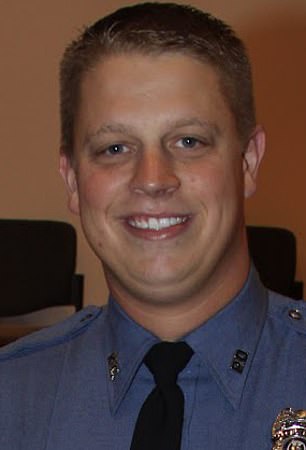 A white Kansas City police officer was indicted by a grand jury on Thursday for the fatal shooting of a black man who was killed while backing his pickup truck into his garage last year.

Detective Eric DeValkenaere was charged with involuntary manslaughter and armed criminal action for recklessly causing the death of Cameron Lamb, according to prosecutors in Jackson County, Missouri.

DeValkenaere claims he shot Lamb after Lamb pointed a gun at another detective.

The charges were announced just days after Lamb’s family met with President Trump at the White House.

Trump is said to have promised Lamb’s mother, Laurie Bey, and stepfather, Aquil Bey, that his Justice Department would bring federal charges against DeValkenaere. 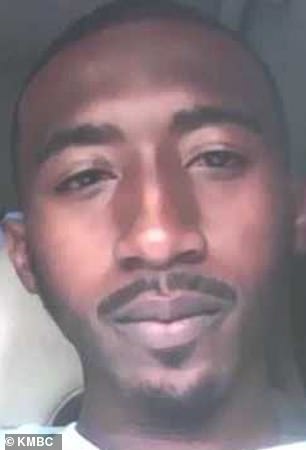 Detective Eric DeValkenaere (left) was charged with involuntary manslaughter and armed criminal action for recklessly causing the death of Cameron Lamb (right), 26, according to prosecutors in Jackson County, Missouri 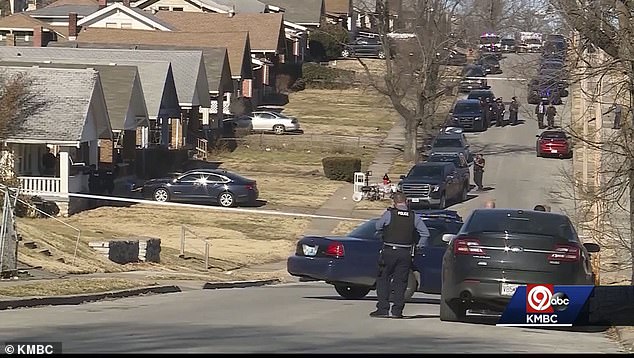 Lamb was shot dead on December 3 as he was in his red pickup truck as he backed it into a garage in Kansas City, Missouri

‘The defendant’s reckless behavior began by entering the victim’s property without consent, without a warrant, knocking over the fence to gain entry into that backyard, and firing his weapon, killing Cameron within seconds of entry,’ Jackson County Prosecutor Jean Peters Baker said.

‘The conscious disregard of a risk, or in this case, a series of risks or assumptions that were dangerous.

‘In this case, what we believe, though, is that his conduct was reckless.

‘It was reckless, and it was in violation of the Fourth Amendment.’

The Kansas City Police Department told KMBC on Thursday that DeValkenaere joined the force in 1999.

At the time, he was assigned to the Investigations Bureau. KCPD said DeValkenaere is currently under suspension.

‘The Kansas City, Missouri Police Department continues to mourn the loss of life and all suffering surrounding this incident,’ KCPD said in a statement.

‘We respect the judicial process, including the grand jury’s finding in this matter, as well as all defendant’s presumption of innocence until proven guilty. 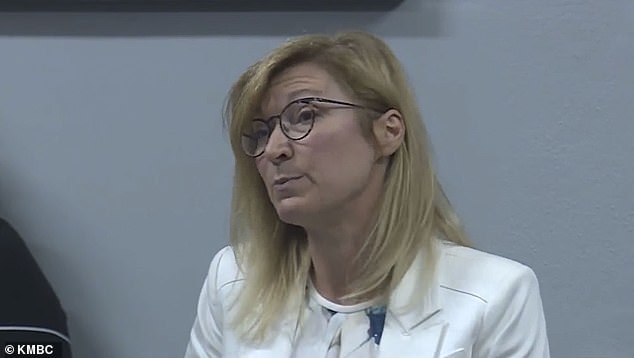 ‘As the case makes its way through court, we will continue to respect the process, and therefore cannot comment further at this time.’

Kansas City Mayor Quinton Lucas praised the grand jury and prosecutors as well as the FBI for their work on the case.

‘My heart continues to break for the family of Cameron Lamb,’ Lucas said.

‘I believe our justice system in Kansas City took an important step today, showing all are accountable before the law.’

On December 3, police were called to an area near the intersection of the East 35th Street and College Avenue in the Oak Park Northwest section of Kansas City.

Police were asked to respond to a disturbance between two vehicles, one of which was a red truck driven by Lamb at a high rate of speed.

A police helicopter tracked one of the vehicles, which pulled behind a home on the 4100 block of College Avenue, according to The Kansas City Star.

According to police, detectives approached a man in the vehicle and ‘the officer was put in a position where he had to discharge his firearm.’ 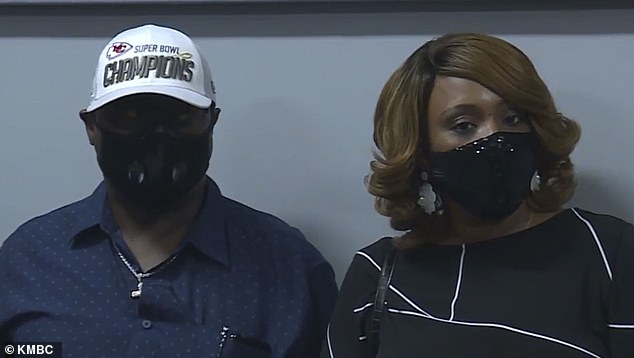 Earlier this week, Lamb’s mother, Laurie Bey, and stepfather, Aquil Bey (left), met with President Trump, who is said to have promised them that the Justice Department would look into the case

The two detectives – DeValkenaere and Troy Schwalm – approached Lamb from different sides of the house as Lamb sat in his truck.

Court documents indicate that the officers saw Lamb backing the truck into a garage.

At one point, Schwalm said he could see Lamb’s left hand, and that Lamb was looking at him. At no point did Schwalm see Lamb holding a gun, according to sworn statements.

DeValkenaere told investigators that he saw Lamb’s right hand on the steering wheel and his left hand sliding down his body.

The detective claimed Lamb reached into his waistband and pulled out a gun, which he aimed at Schwalm.

DeValkenaere then fired his weapon, shooting four bullets into the windshield of the pickup truck.

Two of the bullets fatally wounded Lamb, according to an affidavit.

Investigators at the crime scene said they found a gun on the ground beneath Lamb’s hand where the truck came to a stop.

The police claim Lamb’s body was inside the truck and his left arm was hanging out of the open driver’s side window.

But medical records say Lamb is right-handed, and he had limited use of his left hand because of an injury he suffered in 2015.

According to court documents, Lamb made a phone call just moments before he was shot.

The call went to voicemail, which was able to record the immediate aftermath of the shooting.

‘We are living in really troubled times,’ Peters Baker said.

‘Emotions are high, and however opportune or unfortunate, when you may view the timing of this particular case in this announcement.

‘I view this moment as consequential as necessary.

‘We need to be here. These moments of reform, they’re long overdue for us to have real discussions about how to reform the criminal justice systems. 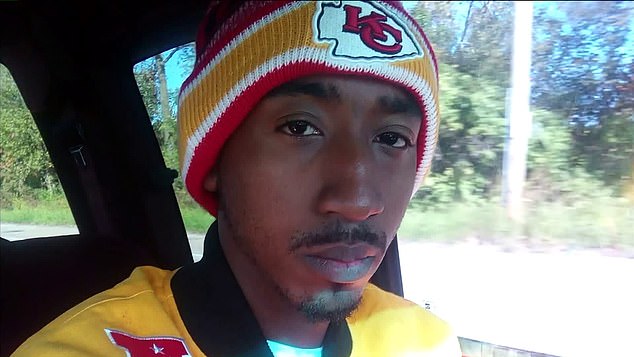 ‘How police prosecutors and the courts must and should reform.’

‘On the date in question, the suspect was involved in a domestic violence situation and then attracted police attention by engaging in a high-speed, dangerous car chase through the residential streets of Kansas City,’ a statement from his lawyers said.

‘Police officers followed the suspect to a residence, which according to a witness on-scene, was not the suspect’s home.

‘When officers approached the suspect, the suspect raised and pointed a gun toward an officer.

‘As these facts demonstrate, this is a justified police shooting.’

An attorney for the Lamb family said: ‘We are pleased at this first step in getting justice for our son, but cannot rest until the man who killed him is behind bars.

‘President Trump and the Attorney General personally promised us a federal investigation into criminal charges for this officer and police department when we met with them this week.

‘We are anxiously waiting for federal action while the state criminal charges proceed against this officer.’

Tesla won the electric-car race — but Musk knows it doesn’t...