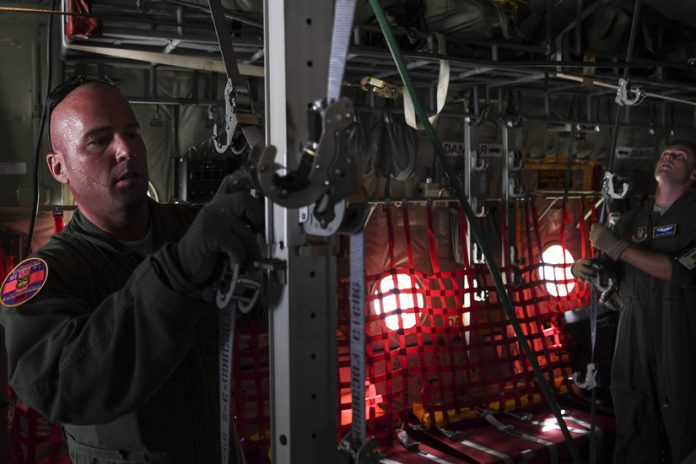 With sirens wailing, a truck horn blasting; fire fighters are headed to their next call which may be a fire, but could also be an accident or a medical emergency.

For Reserve Citizen Airmen Master Sgt. Ryan McClellan and Senior Airman Damien Lewis, fire fighters in their civilian careers, the novel coronavirus, or COVID-19 is an additional safety factor they have to deal with every day.

“When this started, we had to develop a completely new procedure for seeing to possible COVID-19 cases at the airport,” said Combat Readiness Training Center Deputy Fire Chief Ryan McClellan, whose department handles the Gulfport-Biloxi International Airport calls. “We now only have one person go on the airplane to handle the patient, we remove them from the plane, take them to an ambulance, and they never enter the airport.”

The remaining passengers also never enter the airport. They exit the plane, are bussed to the parking lot, their bags are brought out to them, and they are then placed in quarantine status.

Knowing how to handle COVID patients on an airplane is not unusual for McClellan, who serves as an aeromedical evacuation technician, for the 36th Aeromedical Evacuation Squadron of the 403rd Wing.

McClellan has flown missions with patients coming from overseas to bases closer to their homes in the states. He was impressed with how those patients were handled once on the ground for the transfer.

“Right now COVID-19 isn’t just affecting our health,” said McClellan. “With the postponement of two (unit training assemblies), it has also affected how we train and do our jobs.”

Being able to adapt and change is important for every Reserve Citizen Airmen in both their military and civilian duties.

Senior Airman Damien Lewis, 403rd Maintenance Squadron engine mechanic, said, “In my civilian job as a district fire chief for the St. Johns Parish fire department, we now have to take more precautions and respond a little differently than before.”

One precaution he said that they take is instead of sending two trucks to a scene of an accident, now they only send one.

“We also go on oxygen to the calls instead of just a mask, especially if we go to an older resident’s home,” he said. “We also do a complete decontamination after every call using soap and water and disinfecting our gear before we get back in the truck.”

Being in Louisiana, Lewis said that they see a lot of COVID patients and with the new precautions, a typical call takes longer because of the safety procedures that are now in place.

“One such safety precaution for me is to make sure I don’t take anything home to my family,” said Lewis. “I shower and change at work so nothing goes home with me, including my work clothes. They are washed at the fire station and I bring a clean set of clothes to wear home.”

Being safe is important for Lewis in both his civilian and military careers. While on the civilian side it is more personal safety, on the military side, it is safety for those that fly on the aircraft he maintains.

Lewis works as an engine mechanic on the C-130J and WC-130J Super Hercules and being able to work on the engines and keeping those skills up-to-date is paramount to staying safe.

“Another aspect of being safe is to making sure that I get keep up with my skills and help others get the training they need to work on the aircraft,” he said. “Missing UTAs makes keeping those skills more difficult, because as a traditional reservist we are there one weekend a month.”

For both McClellan and Lewis, their fellow military team members are like being with family. And just like with their own families, they have to make sure everyone stays safe and know what is going on.

“We are more than a team, we’re family,” said McClellan. “By working together and keeping communication lines open, we are able to talk to each other and talk out our frustrations.”