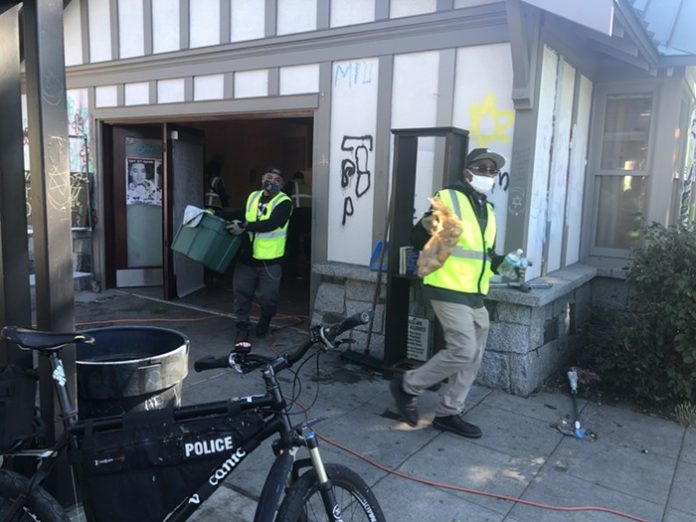 Seattle Parks crews dumping food and supplies for the homeless into their dump truck. Shortly after taking this photo, SPD Officer Couet, who has googly eyes on his body camera casing, told me to leave the park and said if I came back in I’d be “arrested for criminal trespassing.” As I exited the park, I saw a couple people working out and walking their dogs in other parts of the park. RS

Shortly before 10:00 a.m. dozens of cops, at least 13 Seattle Parks vehicles, and a dump truck rolled into Cal Anderson Park to clear the Shelterhouse of protesters, the homeless, and homeless protesters.

A man who gave his name as Rodney said Seattle Police Department (SPD) officers issued a five-minute warning before “they started shaking tents and telling people to get out.” Cops then cleared the park and the small rental facility at its center, which protesters occupied mid-August and transformed into a mutual aid station. People worked in shifts to hand out food, water, and medical supplies to the neighborhood’s homeless population, some of whom remained in the area after the city cleared the CHOP.

Inside the belly of this truck is food and cooking supplies. RS

Rodney, who was fixing his tent on the sidewalk, said he’d been sleeping in the park for a week. He said he’d arrived in Seattle “recently” and didn’t have anywhere else to go.

Another homeless person named Alice said they lost their “daughter’s computer for school” in the sweep.

Carolyn Hitt, who owns Blue Cone Studios, and who spearheaded the mutual aid effort that sprung up to support the protests in early June, said she was taking out some Shelterhouse trash when police moved in. Every morning, she said, Seattle Public Utilities picks up the garbage bags protesters leave on the curb outside the park. “The place is clean by 10:00 a.m. every day,” she said. “It’s so hard to sort this out when they keep doing this,” she added, gesturing at crews tossing food and supplies from the facility into a dump truck and power-washing graffiti.

Protesters said SPD arrested three people in the sweep. SPD hasn’t responded to a request for confirmation. On the sidewalk west of the park I saw police arrest one man after he broke a bottle over the head of a man who was with the protesters. Officers tried to inspect the wound, but protesters shooed them away and said they’d take care of the situation. About half an hour later, I saw the man police arrested hanging out on the east side of the park.

Cops last swept the park and boarded up the Shelterhouse on August 14. The facility opened back up later that day, and protesters began setting up shop again. SPD arrested two people in a chaotic scuffle that weekend. Since then, more people in tents have moved in, and protesters have ramped up their donation efforts. A group called BLM Gear Heads has also been collecting helmets, gloves, gas masks, and shields in one of the nearby tents.

In an extremely long statement, the City offered several justifications for the sweep.

They noted that the park has been officially closed since June 30. They neglected to mention, however, that residents have regularly used the park for dog-walking, people-watching, working out, reading in the sun, drinking beers with friends, etc., every day.

The City also claimed that on August 17 SPU “was notified of an alarm sounding at the Lincoln Gatehouse, a separate facility associated with the Lincoln Reservoir,” which they say “holds 12.7 million gallons of treated water and is part of SPU’s drinking water delivery system.” When “security arrived,” they discovered some damage to the Gatehouse door, which staff repaired. In a 2016 blog post, the City said the reservoir was removed in 2000 and “replaced by underground tanks.”

The City went on to say the Seattle Fire Department has received “nearly 22 calls [sic] to 911 regarding bonfires, rubbish/garbage fires, and requesting medical aid within the park, in August alone,” but said “firefighters have been unable to safely respond to extinguish the illegal burns” due to “firefighter safety and access issues.”

Furthermore, the city claimed “many participants” in the nighttime protest on August 24, where police arrested an Alaskan man for allegedly setting a fire outside the East Precinct’s 12th Ave garage door, “were seen taking refuge within the park.”

“After the repeated refusal of individuals to leave the park, today,” the City continued, “the Seattle Police, at the request of the Seattle Parks and Recreation assisted in clearing those trespassing in the City facility. Parks staff were onsite to address protest supply tents and personal belongings by providing storage, make repairs to the parks facility, and other improvements to further deter break-ins and vandalism. After the park was cleared, the Human Services Department’s (HSD) System Navigators were in the area to engage individuals experiencing homelessness with offers of shelter and services. Staff will work over the next week to mitigate damages to the park.”

HSD System Navigators and other outreach groups have been contacting homeless in the park “in recent weeks,” the City said. They claim “preliminary data show that System Navigators have made at least 54 engagements and 13 referrals to shelter at Cal Anderson Park throughout the closure period,” which presumably stretches back to late June, two weeks before the Shelterhouse was set up.

Park crews prepare to fence off the Shelterhouse. RS

A spokesperson for the Parks department said crews plan to install fencing around the Shelterhouse and to make “changes to door and windows to make them more resistant to break-ins.”

A protester named Ish said he predicted cops would come sweep the park after he saw the City had turned the East Precinct into a mini Helm’s Deep, wrapping the place with fence-topped cement blocks. “We had REACH coming out this Thursday to get people over 25 IDs, and we had another group come out earlier to get IDs for people under 25,” he said. “Now these people are going to get dispersed all over the city again. It makes no sense.”