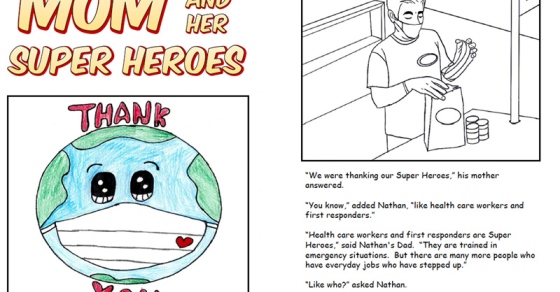 Nathan McTaggart should be playing lacrosse.

But with the season on hold because of the COVID-19 pandemic, the active, sports-loving Coquitlam Grade 8 student is hunkered in his room, sleeping in most mornings and flexing his thumbs on his X-Box controller when he does roust himself from bed.

Nathan’s dad, Keven, says isolation has been hard on the normally sociable teenager. So, to help him deal with some of his anxieties, they embarked on a book project together.

It’s not the first time father and son have collaborated.

Nathan’s published four other kids’ books about super heroes, like firefighters, doctors, assistance dogs and the RCMP musical ride. In fact, the latter was set to be launched in Ottawa in March when the public health emergency hit. All raise money for affiliated causes like the BC Burn Fund, Canucks for Kids, Pacific Assistance Dogs Society and Cops for Cancer.

This latest book, Mom and Her Super Heroes, continues the super hero theme, except these ones don’t wear heavy turnout gear or eat kibble. They’re truck drivers, grocery store workers, pharmacists and teachers. Or, as Keven McTaggart said, they’re “the people out there that are trying to keep your life normal and without them your life would be totally different.”

The combination colouring and activity story book draws upon the McTaggart’s own experiences. Brad the truck driver is a friend of Keven’s, the pharmacist fills prescription’s for Nathan’s mom, the grocery store encounters are their own. Even Coquitlam Mayor Richard Stewart gets a shout-out.

McTaggart said it was important to make the story relatable to every young reader.

“They’ll recognize they’re not in it alone,” he said, adding kids must appreciate the risks being taken by everyday people to ensure some level of normalcy for everyone else.

McTaggart said it took only four days from Nathan’s first enquiry about the purpose behind the nightly pilgrimage his mom was making to the balcony to bang her pots that sparked the idea for another book to its realization.

The story grew from a series of conversations between father and son, as well as Nathan’s mom, Lucie, including one during a road trip to Abbotsford to get cheap gas.

The illustrations that kids can colour were done by Nathan’s former Grade 3-4 teacher, Sarah Shinkewski, and her daughter, Katie Fong.

Shinkewski normally gets her students to create the pictures for Nathan’s books, but with school being conducted virtually this spring, that wasn’t possible, McTaggart said.

In between each illustrated page of the story is a blank page where kids can draw the super heroes of their own lives in lockdown, or even write down their thoughts.

McTaggart said he hopes young readers will take the opportunity for self-reflection.

• Mom and her Super Heroes is available as a free digital download at www.nathanssuperheroes.com. It includes a link to national food bank organizations in Canada and the United States where donations can be directed. The authors are also encouraging parents to email a photo or scan of their child’s favourite page for posting on the website and social media feeds to create a more communal experience.

Do’s and don’ts of donations, and how it helps more than...