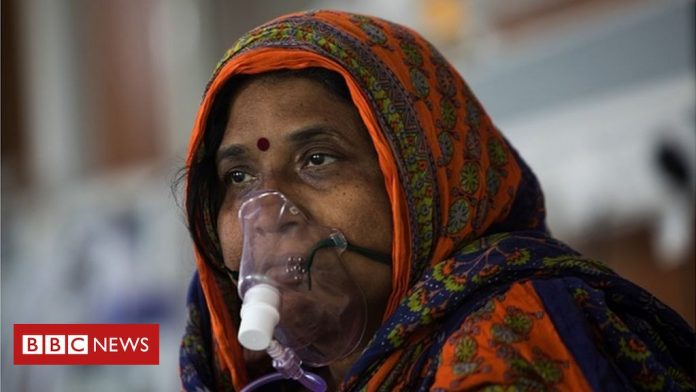 Ankit Sethia spent a sleepless Friday night trying to procure oxygen for his 50-bed hospital on the outskirts of India’s commercial capital, Mumbai.

Only two of the four tanks of liquid oxygen at Mr Sethia’s SS Hospital and Research Centre in Bhiwandi were full. Forty-four of the hospital’s 50 beds were occupied by Covid-19 patients, many of whom needed piped oxygen from the tanks to breathe.

Each tank was getting exhausted in six hours instead of the usual nine hours, because of the surge of patients. Both Mr Sethia’s dealers had run out of supplies.

Through the night, he called 10 dealers and four hospitals in and around Mumbai to ask for oxygen. None could help. Around 2am, he finally managed to get 20 large cylinders from another hospital, some 18 miles (30km) away. There were no vehicles available, so his ambulances did five trips through the night to get the cylinders. Four people now work round the clock at the hospital to procure supplies from any maker who can send a truck of liquid oxygen for the tanks or any dealer who can spare a cylinder.

“Now I have enough oxygen for the next 12 hours,” Mr Sethia said on Sunday evening. “We are firefighting every day. The battle is to get some oxygen anyhow.”

Some 15% of Covid-19 patients require help with breathing, according to the World Health Organization (WHO). Some people appear in no evident respiratory distress, but are found to have dangerously low oxygen levels – a condition called silent hypoxia. A fraction of the critically ill patients require a ventilator.

Around 500 factories spread across India extract and purify oxygen from the air. Oxygen for medical use typically accounts for 15% of overall supplies. The rest – industrial oxygen – is mainly supplied to steel and automobile industries for running blast furnaces.

The factories ship oxygen in liquid form to hospitals in tankers, which is then converted into gas and piped directly to beds. Some hospitals also use steel and aluminium cylinders which store oxygen in gas form – but this requires frequent change of cylinders for each bed.

Portable machines called concentrators, which filter oxygen from the air, are also used in some hospitals. All of these are being used to treat Covid-19 patients.

As India opens up its economy and people return to work, Covid-19 cases have been surging through small towns and cities. With more than 4.8 million reported confirmed infections, India’s caseload is the second highest in the world, after the US. Some 600,000 cases were added just last week, and more than 90,000 cases were reported just on Saturday. One newspaper calls it a “scary, runaway phase” of infections.

Not surprisingly, demand for oxygen has risen exponentially. Hospitals and care centres are consuming up to around 2,700 tonnes of oxygen every day this month, compared to 750 tonnes in April, according to data obtained from All India Industrial Gases Manufacturers Association.

Oxygen manufacturers say the demand for industrial oxygen has also shot up because more factories are now reopening. The states seeing a worrying uptick in infections – Maharashtra, Madhya Pradesh, Gujarat, Rajasthan, Telangana, Andhra Pradesh – are suffering the most. It’s a grim lives-versus-livelihoods question that India is grappling with now.

“Now 45% of the oxygen we are producing is going to industries, while 55% is going to hospitals and nursing homes,” said Saket Tikku, the president of the All India Industrial Gases Manufacturers Association. “The government is in a bit of a bind. If we cut supplies of industrial oxygen to factories, industry will get hurt. On the other hand, if we are not able to augment supplies of medical oxygen, then lives will be in danger,” he said.

India will now need to increase capacity to make sure that both industries and patients don’t suffer. And that is not all.

Most oxygen plants are built near cities and big towns. So supplies to far flung districts where Covid-19 patients are filling hospitals have to be sent by special trucks carrying cryogenic tanks – India has some 1,500 such trucks. Many states – the capital, Delhi, for example – don’t have a single oxygen manufacturer, and all supplies have to come from neighbouring regions.

Death rates could easily climb because of short supply. Last week, there were reports of four Covid-19 patients dying in a hospital in central Madhya Pradesh state because of a lack of adequate oxygen, a claim that officials have rejected.

Memories are fresh of August 2017 when some 70 children died in a government hospital in northern Uttar Pradesh state after the oxygen supplier cut off shipments because his bills went unpaid.

But what is clear is that Madhya Pradesh is battling a severe shortage of supplies. In Chindwara district, a dealer told me at the weekend that he had not received any supplies for a week now. Piyush Bhatt, who runs a five-year-old refilling company, said that the monthly demand for cylinders in the district has grown by more than four times in the last month.

The 1,000-bed hospital in the district has been overflowing with Covid-19 patients, and Mr Bhatt, who is the main supplier, is idle because liquid oxygen supplies from plants in Maharashtra, some 125km away, have stalled.

With a million recorded cases, Maharashtra has the highest number of reported infections in India. Panicky officials, fearing a shortage of oxygen, have limited supplies from local factories to other states. “My supplies have stopped because trucks have stopped coming from across the border,” said Mr Bhatt. “I have never faced such a crisis in my life.”

On Monday, Mr Bhatt was still waiting for supplies. “If the government doesn’t sort out this oxygen crisis quickly we will have a situation like Italy at the peak of the pandemic,” he said.

At a private hospital in Chindwara, doctors were finding it difficult to provide oxygen to regular patients. “It’s a very tense situation,” Dr Danish Khan, who works at the 60-bed Glory Hospital, said. “If we can’t get adequate oxygen in time, we will have to stop taking patients.”

Hundreds of miles away in the city of Jodhpur, in Rajasthan, the 960-bed All India Institute of Medical Sciences was slowly getting overwhelmed by Covid-19 patients. Most of the 400 reserved beds were full on Monday morning, and 100 of the 110 intensive care beds were occupied. The hospital’s two liquid oxygen tanks are empty because of a shortage in supply. “We are managing on cylinder supplies from multiple dealers even as patients pour in,” NR Bishnoi, a senior hospital official, said.

Back in Bhiwandi, Ankit Sethia is fielding calls from desperate hospital owners begging for oxygen. At the weekend, he gave away a jumbo cylinder to a neighbouring private hospital.

“The hospital owner told me that five of his patients would die if he didn’t get one cylinder to cover 30 minutes needed before delayed supplies arrived,” Mr Sethia said. “The situation is that grim.”

Do-Nothing Dustin CRASHES Funeral for His 2 Dead Children After Leaving...

Furniture and clothing stores have been ‘Harrisburg staples’ for almost 50...